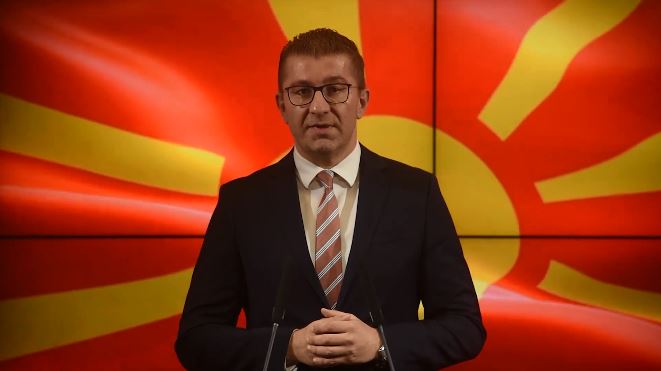 SDSM’s draft law on the Public Prosecutor’s Office represents a continuation of the overthrow of the legal system, and the ruling party should be sincere in wanting to bring it into the proposed form in order to pardon their leader Zoran Zaev from responsibility,  leader of the opposition VMRO-DPMNE Hristijan Mickoski said in an interview with Press24.

Asked why VMRO-DPMNE opposes the proposal for the Law on Public Prosecutor’s Office, Mickoski considers that it is a proposal that wants to ensure full control over the institution, and emphasizes that the only aim of the government is to pardon former Prime Minister Zaev.

“VMRO-DPMNE’s remarks on this law have been confirmed by experts and the entire renowned legal community. What SDSM wants to do with this law is to provide control over the prosecution to provide an informal pardon for the crimes its officials will be held accountable for. Let them be honest and say that they are bringing the law on prosecution to pardon Zaev. They want Ruskovska who will prosecute whenever Zaev calls, Joveski who will defend and Kacarska who will judge. So we see how people testify about her influencing cases, the allegations against Judge Dika of money laundering and Zaev’s entire remaining corruption in the judiciary that is corrupt to the gut, ”says the VMRO-DPMNE leader.

Mickoski says that if the SDSM agrees with the amendments submitted by the opposition to prevent it from actually protecting the crime, the law could be passed before the dissolution of parliament.

“This law of SDSM is to continue the collapse of the legal system that Zaev wants. Well it won’t pass. The law is unconstitutional, contrary to criminal law, it does not provide for the fight against corruption, but the protection of crime, and will only mean the continuation of the SPO’s legalized crime in the form of the PPO. Our red lines are a law that is in line with the Constitution, applicable and will ensure the independence of the prosecution and the impartial fight against crime. If SDSM is ready for this, the law can be passed immediately”, Mickoski said.

In the context of the rule of law and corruption as a key issue, Mickoski announces a plan to tackle this occurrence, which will soon be presented to the public and elaborated by top foreign and domestic experts.

“Through judicial reform, enabling the political will to free the justice system from the clutches of crime and politics. And through responsibility for all those who have violated the law. I will be ruthless and fully prepared to go to the very end. This fight against corruption must begin in all echelons, from the lowest to the most important, and most importantly to the highest echelons.  We have to establish the rule of law and get rid of those caricatures in the judiciary and prosecution that serve political interests. I do not want to be a prime minister who will find out of court decisions like Zaev in advance just because he ordered them. Orders will not pass. I don’t want my co-workers to be a protected caste for which the law does not apply. The responsibility must start from the highest holders of power. We are developing a precise strategy to fight corruption and crime. Believe me, it will be the most comprehensive action against offenders.
Drastic measures are needed to ensure justice is delivered, as the situation is alarming. During this month we will present some of these measures. Their work is assisted by the most renowned foreign and domestic experts”, the leader of VMRO-DPMNE added.