Home Macedonia Jean Monnet Dialogue: 90% of issues agreed, task of next Parliament is... 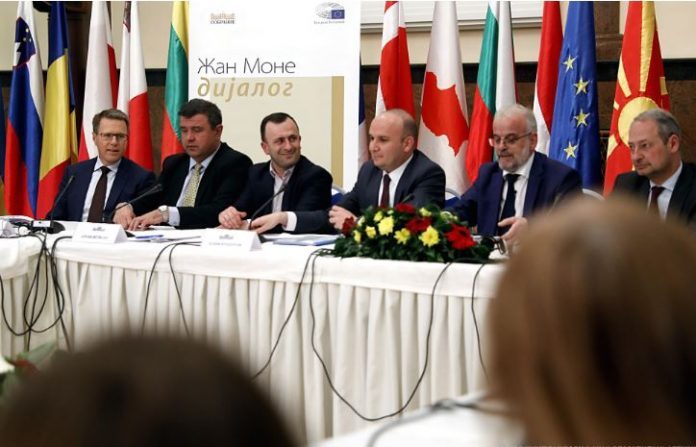 Lawmakers have drawn their positions nearer and agreed on certain aspects of the reforms to the Parliament’s Rules of Procedures during the third Jean Monnet dialogue that took place in Skopje over the past two days.

“We agreed on all key aspects for reforms of the Rules of Procedures and reaffirmed our commitment to the enhancement of democratic processes. We put our political differences aside in order to consolidate the Rules of Procedures. We have made significant reforms that we leave as legacy to the next Parliament. The harmonized text of the amendments has been annexed to the conclusions of the third Jean Monnet dialogue,” said Speaker Talat Xhaferi at Saturday’s press conference upon the conclusions of discussions.

According to him, parties agreed on 90 percent of issues related to the changes in the Rules of Procedures, but it is up to the next Parliament to adopt them.

The Speaker said the Jean Monnet dialogue produced specific results to strengthen the Parliament in the crucial period of the country’s EU accession.

Andreas Schieder, chair of the Delegation to the EU-North Macedonia Joint Parliamentary Committee, said the two days of dialogue were positive, resulting in a new Rules of Procedures so that the new Parliament is more efficient and focusing more on political issues rather than use of tactics and impasses.

“All political leaders were exceptionally constructive in solving the problems at hand,” said Schieder and added the pre-election period was a time to come to an agreement with all political parties in the country over the core of the Rules of Procedures and its content, applying it in practice after the polls.

He noted that the fourth Jean Monnet dialogue would be launched after the new Parliament is sworn in, because there are many other issues to be discussed besides the Rules of Procedures.

ilhan Kyuchyuk, North Macedonia Rapporteur in the EP, said they would cooperate with both ruling and opposition parties in the future, because there is a need for more strengthened cooperation when it comes to EU-related reforms.

“The Parliament plays a leading role in a parliamentary democracy. The key process of reforms in the country is developing through democratic procedures and consensus among political parties and different stakeholders in society. Transparency, predictability and inclusiveness are the main features of parliamentary democracy. We are friends of North Macedonia and will continue to be friends, for bad and for worse,” said Kyuchyuk.

“Among other solutions, the most important thing is that we have managed to resolve the European flag abuse of laws coming from the government, and we have had many such cases in the past three years. We welcomed the withdrawal of the proposal to limit the discussion to three days by SDSM in a plenary session, clearly indicating that they are preparing for opposition and do not want to limit the discussion. However, we are closing the dialogue on changes in the Rules of Procedure for this Parliament, there remains a solid basis for dialogue and for closing the contentious issues in the next Parliament”, Micevski said.

SDSM parliamentary group coordinator Jovan Mitreski reiterated his view that they leave a good basis for the next parliamentary mandate to continue working this way, or this time in the hope, as he said, that what has happened in the past will never again repeated.