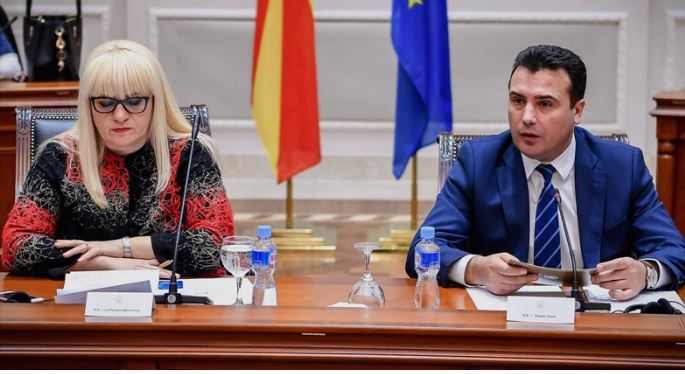 Macedonia is sinking in corruption because it has no rule of law. SDSM, Zoran Zaev and Renata Deskoska have fully privatized and politicized justice and institutions in the Republic of Macedonia, VMRO-DPMNE said in a press release today.

“It was little for Deskoska to run for herself as a member of the Venice Commission, so she introduced criteria for all those who take the bar exam to own her husband Toni Deskoski’s books. The make the scandal even greater, Deskoska completely involved the party the Judicial Examination Commission.

The commission itself has a series of conflicts of interest. Appointing the sister of SDSM MP Snezana Kalevska Vanceva, Antoanela Dimovska, appointing of Tanja Mileva, wife of former candidate for SDSM mayor of Radovis and former SEC member Igor Milev, appointing of Zaev’s friend, the president of the Stip Appellate Court Nake Georgiev, appointing  a Strumica judge whose wife is a public prosecutor in Strumica; appointing former SEC president Aleksandar Cicakovski, lawyer Valentin Pepeljugovski, whose law firm appears to be favored by SDSM, and has paid around $ 17,000,000 in damages, according to writings in which she took part in the disputed decision to re-vote in Tearce in 2016, are just some of the controversial appointments to the bar exam committee”, the party said.

They added that with such appointments by Deskoska, taking the bar exam will depend on the subjective assessment of the commission members, whether the candidates were or are active supporters of the policies of SDSM and Zoran Zaev.

“The only criterion for selecting the members of the commission is obedience to Zaev. In this way, Zaev and Deskoska completely destroy the justice system in the Republic of Macedonia. This is a school example of nepotism and partisanship”, reads the VMRO-DPMNE party statement.