Home Macedonia Mizrahi for Haaretz: Macedonians are not anti-Semitists, the attacks were part of... 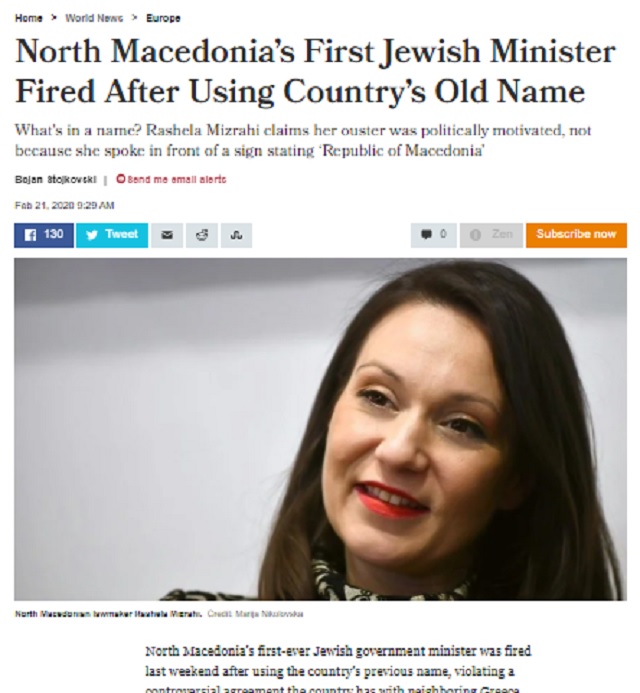 The most circulated newspaper in Israel, Haaretz, published a story related to the
first Jewish minister in Macedonia who was fired after using the country&#39;s old name.
Rasela Mizrahi claims for the renowned newspaper that her resignation comes as
politically motivated, not because she spoke in front of a board bearing the name
&quot;Republic of Macedonia&quot;.
The paper says the first Jewish minister in North Macedonia was sacked last
weekend after using the country&#39;s former name in violation of a controversial
agreement the country has signed with neighboring Greece.
&quot;The dismissal of Rasela Mizahi, initiated by Prime Minister Oliver Spasovski, was
among the latest acts of the interim government in the small Balkan state.
Lawmakers voted 62-26 in favor of Mizrahi&#39;s dismissal after she held a press
conference in front of the sign bearing the country&#39;s former name, &quot;Republic of
Macedonia&quot;.
Anti-Semitic attacks were a surprise. &quot;People in Macedonia are not anti-Semitic,&quot;

Mizahi told Haaretz. &quot;I think those attacks are part of a gruesome political scenario
that has risen to the level of anti-Semitism, mentioning yellow stars and nasty verbal
attacks,&quot; the paper writes.