Home Macedonia Psychopath stabs and sets his mother on fire

A forty-seven-year-old man with a mental disorder from Skopje stabbed his own
mother and then set her on fire. The woman was taken to a clinic where she was
found to be heavily injured.
According to the Ministry of Interior, yesterday at 4:23 pm police officers from Kisela
Voda Police Station arrested V.S. (47) from Skopje, a person with mental health
problems, after the police received a report that around 15:40 on &quot;Sava Kovacevic&quot;
Street he physically assaulted his mother A.S., 88, from Skopje, inflicting injuries and
then setting her on fire, but the fire was extinguished by her neighbors. A.S. was
taken to Mother Theresa Complex Clinics where she was found to have serious
injuries.
Police say the knife was confiscated from the crime scene and that they are doing
their best to solve the case. 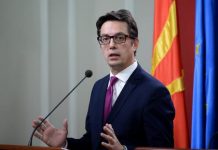