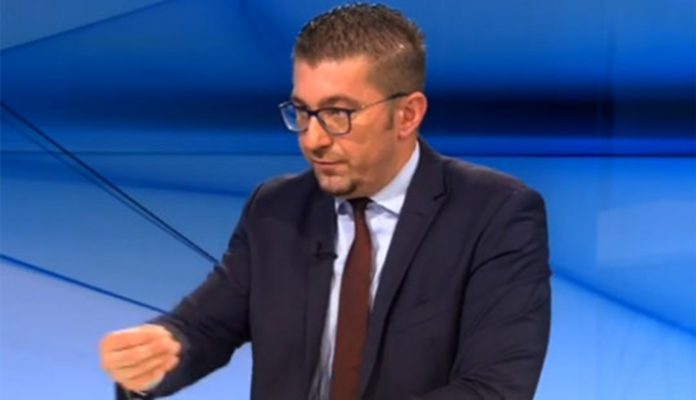 Yesterday we witnessed the painful truth of how Zoran Zaev rules Macedonia and why the state is at the bottom. It is a demonstration of how the mafia has its own state and justice ceases to breathe, VMRO-DPMNE leader Hristijan Mickovski said at a news conference Monday.

“You all heard the tape. Zaev is abusing his office and is directly influencing judicial outcomes. The Prime Minister was both judge, jury and prosecution. Prosecutors who should investigate his actions are in his lap, and remain silent. But VMRO will not be silent. I call you to join us on a protest march in front of the state prosecutor’s office in Skopje and the Supreme Court. There must be accountability for what Zaev did.”

The recording that was released on Sunday shows Zaev discussing the cases Special Prosecutor Katica Janeva initiated and saying how both Janeva and Supreme Court Chief Justice Jovo Vangelovski can’t do anything without Zaev’s say-so. The then Prime Minister is apparently discussing ways to bring down some of Janeva’s cases, using either the new law on state prosecutors or the Supreme Court. Zaev was overtly blackmailing members of Parliament to side with him and was using charges initiated by Janeva against them, and now he claims that some of them recorded their conversations, but VMRO-DPMNE official Antonio Milososki, who released the tape, says that it was recorded during a meeting Zaev had with a person involved in the Racket trial.

He now tries to tell the public that he was working to sav the cases started by the Special Prosecutor. Are we to believe that he was meeting with the “Gang of eight” and was persuading them that it is good for them to be sentenced in the cases against them? The same cases which we see are now falling one by one? The audio material proves that he tried to drag out the Special Prosecutor’s cases and that Katica Janeva was aware of this. His plan to end the cases in failure was either through the new law on state prosecutors, or, as he says, through a decision of the Supreme Court which he describes with a “WHAM BAM”, said Mickoski.
We want accountability from the octopus head that cannot hide. But we also want to send a message for the custodians of Zaev’s injustices, the prosecution and the Supreme Court. This state that rests on justice, on our struggle for independence and freedom, on the respect for the law, in which Macedonians fight for their justice, must oppose such a brutal violation of laws and the Constitution. It is our obligation, our duty and our task,” concluded Mickoski.