Home Macedonia Mickoski said: Zaev you will lose! You will be defeated by the... 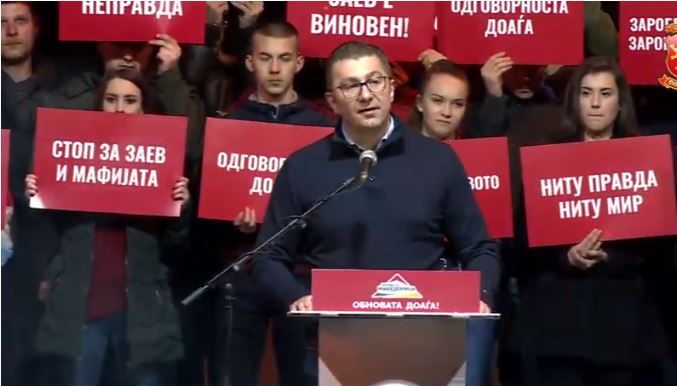 There will be accountability, I tell you no matter, who they are and where they come from. And the people have already taken the fate into their own hands and know what to do. This is a fight for the rescue from the mafia, for me it is a fight for the salvation of Macedonia, VMRO-DPMNE leader Hristijan Mickoski said in front of the crowd at Tuseday’s protest in front of the Prosecutor’s Office and the court.

He thinks that this is not the European Macedonia the people deserve, this is the story of a mafia whose struggle is for power and money.

“In the end, you will be defeated Zaev, you know it. You will be defeated by the people. If you were not dignified while in power, then be dignified in defeat, and do not stand in the way of the people. There is no going back. We will restore justice, and honor, and you have my word, and that is in the code of the Macedonian, because the Macedonians love freedom the most, and believe in it as they believe and love our homeland,” Mickoski said.