Home Macedonia There must be accountability because it is the only way to have... 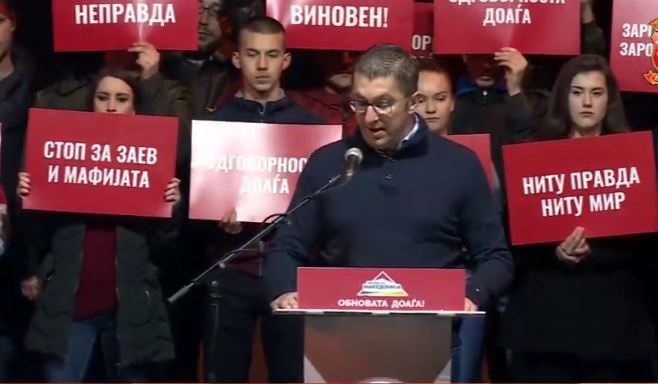 We are not the same in the seriousness of the feasibility and the future results of the project reforms that we are promising unlike what Zoran Zaev promised and did not fulfill. We are not the same in the people who are with us today, and they will prove to you that not only can we work much better and more than what is now being delivered by Radmila, Spasovski, Raskoski, Filipce, Kiracovski and the rest of the racketeers. There must be accountability because because it is the only way to have a state, said VMRO-DPMNE leader Hristijan Mickoski at Tuesday’s protest against the injustices that Zaev’s government inflicted on Macedonia.

“That killing of justice and lack of results has brought apathy to the people, and I understand it. But that in itself is not the answer, because the government that is the root cause of that apathy if it is not punished will continue as before. People in local elections punished VMRO and VMRO learned the lesson, now it has to punish SDSM for SDSM to learn. Sitting at home and apathy has not changed for the better. That apathy is what SDSM wants because it means support for them. There must be faith and hope that this energy that means change and renewal can be felt better. The forthcoming elections are a new chance for our people to return the state in their own hands, and to show that Macedonia can, and that it deserves more,” Mickoski said.