The National Bank expects a larger deviation in its October projections for economic growth, as a result of the appearance of the coronavirus, which, as an unexpected external shock, is expected to be reflected in several segments of the economy. This is the assessment from today’s session of the National Bank’s Operational Monetary Policy Committee, despite the stable flows in the economy in the first quarter.

“The latest available data point to stable flows, but uncertainty about the future macroeconomic effects of the Cavid-19 pandemic is high.” The available high-frequency data on economic activity for the period January-February 2020 so far indicate a continuation of economic growth in the first quarter of the year, but the risks for the next period are unfavorable. In terms of inflation movements, as of the end of March, the average annual growth rate of consumer prices is 0.6 percent, which is still a lower performance than the October projection. The level of foreign exchange reserves continues to be maintained in the safe zone, with the performance in the first quarter of this year generally in line with expectations. Regarding the movements in total deposits and total loans, the initial data for March show further annual growth of both deposits and loans, without major deviations from the projection for the first quarter of the year,” explained the National Bank. 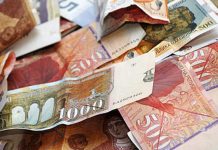