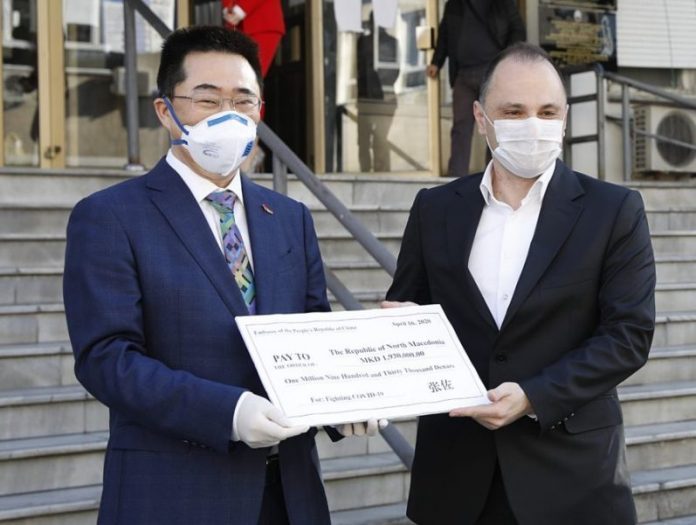 Chinese Ambassador to North Macedonia Zhang Zuo handed over Thursday a donation of Mden 1,930,000 from the Chinese Embassy to Health Minister Venko Filipce, to help in the fight against the coronavirus.

Health Minister Venko Filipce thanked Ambassador Zuo for the donation and expressed interest in discussing the pandemic with epidemiologists and infectious diseases experts from China, where the virus has passed its peak.

“We’re aware that there’s a global demand for protective gear and we’re very thankful for the donation. I hope we’ll be able to get in touch with epidemiologists from China, where the virus has passed its peak,” Filipce said.

A donation from the Chinese government is also expected to arrive in North Macedonia soon.

“The donation is ready, the only thing left to do is arrange transport details. When China was going through a hard time, your President and Health Minister offered immense support. Now it’s up to use to return the favor,” Ambassador Zuo said.

He discussed with the ambassador the steps the country plans to take when restrictions are ultimately lifted.

Ambassador Zuo relayed at the meeting an invitation from China’s top healthcare officials for Health Minister Filipche to take part in a video conference at the beginning of May.

Macedonia has also received donations of about 50,000 face masks and 200 protective bodysuits from Chinese sister cities.