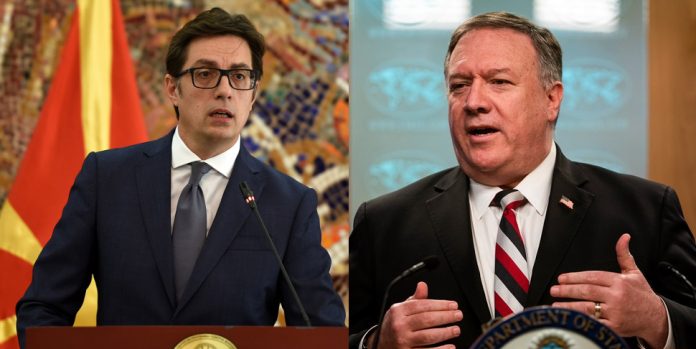 Efforts in fighting COVID-19 and regional developments with emphasis on the Kosovo issue were in the focus of the phone conversation between President Stevo Pendarovski and United States Secretary of State Mike Pompeo on Monday.

On behalf of the citizens of North Macedonia, Pendarovski extended condolences over the death of over 50,000 U.S. citizens as a consequence of COVID-19 and expressed solidarity with the American people, the President’s Office said in a press release.

Interlocutors exchanged information on the efforts to manage the pandemic, with Pendarovski thanking Pompeo for the U.S. assistance that has exceeded over US$ 1 million, which is a confirmation of the mutual solidarity and friendship amid a period of serious challenges for mankind.
President Pendarovski thanked Secretary Pompeo for the U.S. support, and especially the U.S. diplomacy, in fulfilling North Macedonia’s strategic objective to join NATO, reads the press release.