Home Macedonia Opposition considers that the government that is stuck in crime is taking... 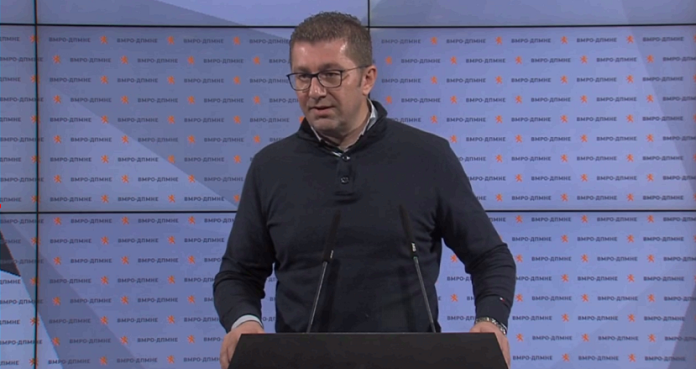 Although I do not justify them, I understand Zoran Zaev and the apologists of the government, as they must defocus the public from the real issues. It is Culev’s fault in the morning, then it’s my fault in the afternoon. But the background is different. Culev reveals the crime to them, and I tell them the truth, wrote the leader of VMRO-DPMNE in a Facebook post.

In his response to the illegal recordings of his conversation with the only convict so far, Zoran Mileski, after admitting guilt in the corruption case “Racket”, Mickoski further emphasized that if they were not published now, the truth would be discussed, and according to him it is:

“This is desperate move and delicate emotional state of Zoran Zaev , where it is clear that there is direct evidence that he is knee-deep in crime, corruption and racketeering. This is also an opportunity for the public to see that there is nothing incriminating in those published recordings. I am convinced that if there was at least one dark spot in my past, I would be somewhere else today and I would not have written this. This tells me only one thing that Zaev is scared of defeat. And a terrible defeat awaits him”, says Mickoski.

He reminds that at a press conference on August 16, 2019, when asked by a journalist if he met with Zoran Milevski Kicheec did not deny that I met him, but from then until the interview that was published in the media in November 2019, he said that he did not meet him, which according to him is the truth.

“I look at this episode very calmly and with great ease, but also joy because the end is near, and let Zaev and his instruments and emissaries know that he is sending them with the hope that something can be agreed after the elections so that it does not match. Certainly there are two things, first together with the people we will beat them all and secondly, there is no escape from responsibility,” said Mickoski.