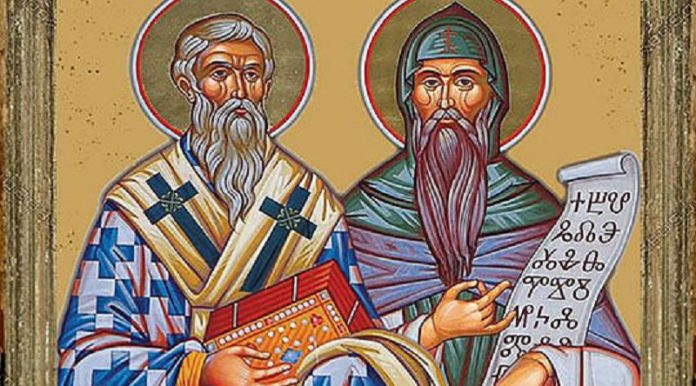 Macedonia today observes the Day of Ss. Cyril and Methodius, brothers born in Salonica in the 9th century, who became missionaries of Christianity among the Slavs of Greater Moravia and Pannonia.

Ss. Cyril and Methodius are credited with creating the Glagolitic alphabet that was used to translate the Bible in the Old Slavonic language and spread across Central and Eastern Europe. Their work was essential to creating the Cyrillic alphabet now in use throughout much of Eastern Europe and this earned them the title of Apostles to the Slavs and co-patron saints of Europe.

Ss. Cyril and Methodius are celebrated in the Orthodox Church as “Saints Cyril and Methodius, Slavic teachers.” One was a bishop and the other was a monk: Cyril was a monk, and Methodius was a bishop and archbishop. Both were very educated people. They were among the most educated in the entire Byzantine Empire. Their origin was from Macedonia. They knew their people and their mother tongue. So they wrote the first letter in that language, the alphabet, and set the rules for writing.

Ss. Cyril and Methodius were brothers from Salonica, of eminent and wealthy parents, Leo and Maria. The elder brother, Methodius, spent ten years as an officer among the Slavs in Macedonia, and thus learned the Slavic language. After that, Methodius went off to Olympus and gave himself to monastic asceticism, and Cyril (Constantine) later joined him there.