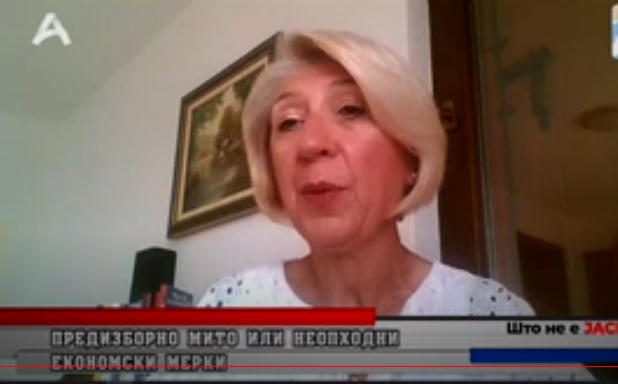 University Professor Slagjana Taseva, in her interview with Alfa TV&#39;s &quot;Sto ne e
jasno&quot; show, spoke about the government&#39;s payment cards for overcoming the
pandemic crisis, noting that it all was a kind of populism, i.e. winning certain citizens
to vote for certain political policies, and assessed that the large number of objections
to this measure shows that the Government was not prepared for it.
&quot;All this in some way seems like a kind of populism, which in pre-election conditions
can be considered that it can be the gain of voters or citizens who would vote for
certain policies or political options. And here the line between pre-election bribery
and real support of the citizens, when we talk about how these issues are regulated
in the laws, that line is quite fine. The government has issued a decree imposing
certain articles of the Anti-Corruption Law to the provisions of Article 34 of the Anti-
Corruption Law, which prohibits the payment of salaries, pensions and other
contributions that are not part of the regular wages during an election campaign,&quot;
said Prof. Taseva.
She added that the provision was now out of force, but would enter into force
immediately when the state of emergency would cease and they must take caution
to ensure that laws were enforced as they were written, and properly to prevent any
suspicion of pre-election corruption. The government, i.e. the people who make
these decisions, should pay attention to this.