Home Macedonia Mickoski: We will show that Macedonia can be one of the best... 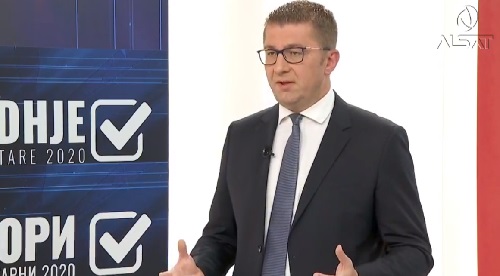 VMRO-DPMNE leader Hristijan Mickoski, during his address today in front of the citizens in Butel, thanked them for everything they have done for Macedonia and VMRO-DPMNE in the past years.

“There were times when we rejoiced in the victories, but I know there were times when you accepted the defeats with dignity and mourned, but all that united us was the love for Macedonia, the vision, the desire, the dream of what kind of state we want to have and what kind of country we want to leave to our children. And that is the eternal dilemma that our political opponent may not understand because we do not have the same desire, the same love for the homeland, for Macedonia. We are not ready like them to tear it apart, shame, humiliate and plunder their own country, but we are dignified and proud Macedonians who love their homeland and who are ready to sacrifice the last drop of sweat for the homeland so that it can succeed, as we dream of it to be,” Mickoski said.

He stresses that these are not ordinary elections between political parties, but a vision of a strategy that should unite Macedonians, Turks, Albanians, Vlachs, Bosniaks, or literally unite everyone against those who plunder and make the Republic of Macedonia a state of criminals, a state full of corruption.

“Many of you were brutally fired because they were supporters of VMRO-DPMNE. I am aware of that trouble because it is our common destiny and trouble. But we all need to unite and stand side by side. We have united many times in history until now and we have defeated many more numerous and very powerful opponents of this leadership of SDSM and Zoran Zaev. When I needed my people, my country, then I was determined and brave and I faced the challenge because I believed in what was great, and that was the dream for that Macedonia as we want it to be,” said Mickoski.

Mickoski told the citizens that the only thing Zaev brought was only unrest in the souls of all citizens living in Macedonia. According to him, it is the harsh truth and the videos of VMRO-DPMMNE want to show that, ie to show the government of SDSM and Zaev and its failure.

“I want to show and prove in this 4-year term that it could have been done differently, that it could have been done honestly and honestly, and that Macedonia could be the best country in the Balkans.” That is our goal, our vision and that is what you are worth fighting for. The “Renewal” project, which is created on 360 pages and includes VMRO-DPMNE projects for the coming years, will provide 25% higher average salary, at least 20% higher pensions, at least 640m euros in subsidies, and will be protected. national dignity, you will find that Goce Delcev is not being negotiated, he is a Macedonian, and many other things,” added Mickoski in Butel.