Home Macedonia Who is Tushnik, the person with “green light” to torch cars across... 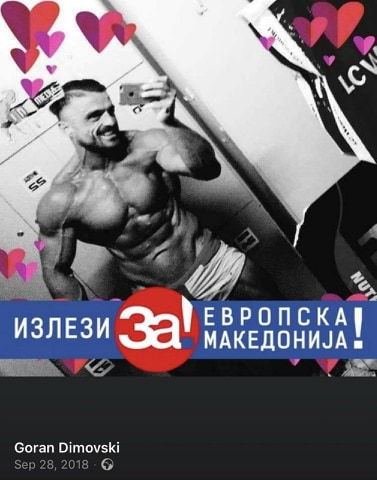 One of the people who, according to the author of the audio recording posted yesterday on YouTube took part in the recorded conversation in which a series of illegal activities are listed, has been identified as a certain Goran Dimovski nicknamed Tushnik from Bitola, who according to the information obtained by NetPress, repeatedly goes through the records of the Ministry of Interior.

Namely, against Goran Dimovski -Tusnik, who is shown on social media as a supporter of SDSM, and according to the allegations stated there, is part of a “rapid intervention team”, as we find out, criminal proceedings are underway for seven offenses, such as usury, fraud and aggravated theft.

A new audio recording titled “Vice gave the green light to light a car” appeared in the aforementioned “audio bomb” on the YouTube channel “Vice Mafijasot”, in which a conversation is heard between two men who are claimed to be Stojce Chifligaroski, owner of SV Invest, a company that was correlated with the Zaev family and one of the most frequent winners of the tenders in REK Bitola and close to Vice Zaev and Goran Dimovski, the latter brags that he received a “green light” from Rasho, who is probably Radisa Bojovic’s son-in-law of Zoran Zaev, and will meet with Zoran’s brother, probably Vice Zaev, to set fire to a car of a man from Bitola because that he was a VMRO-DPMNE supporter.

Given previous criminal racketeering incidents, especially the burning of hundreds of private vehicles, almost none of which have been solved, the question arises as to whether Tushnik is part of a larger group of underground people who, with the blessing of the Zaev family, torched cars in the past two and a half years across the country. For example, in the city of Stip alone, in less than two months, almost 30 cars were set on fire. There was almost daily torching of private vehicles in the capital, Skopje, where the vehicles of two musicians, the mayor and a former senior security official, and both members of the ruling party, were damaged.

Then the recording reveals that this person earned 30 thousand euros through the Strumica network through a lawyer to get a man out of detention for which he received a gold watch as a reward, but also that he plans to take a car without documents, but also that a certain Trajce is the one who gives permission for who to work and who not in Strumica and Macedonia.

There is also a section in the conversation that deals with staffing and activities, probably in the pre-election period, but it is not clear which elections are in question.

The information about the alleged connection of SDSM under the leadership of Zaev with the criminal milieu has a longer prehistory, and it dates back almost to his coming to the post of Prime Minister.

Journalist Saso Ordanoski also wrote about the frequent cases in 2017 when he linked such criminal activities to a security agency “from a city in southern Macedonia”.

An anonymous member of the now disbanded Alpha police unit also testified about the torched vehicles.