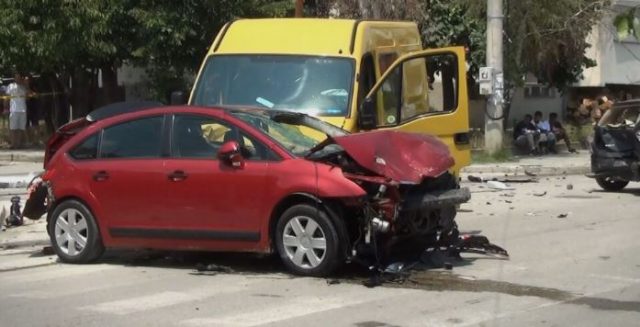 A van carrying migrants crashed in the middle of Strumica on Tuesday at noon. The
van with Kocani license plates passed through one of the busiest streets in the city at
high speed, most likely fleeing from the police, but crashed into three parked
vehicles on Mladinska Street. Eyewitnesses were alarmed by the sight, saying most
migrants had fled through the side streets.
In addition, 32 migrants were found by police officers from the Strumica SIA from the
Renault Master vehicle, 15 of them from Afghanistan, nine from Pakistan, six from
Bangladesh and one each from Syria and Iraq.

After the accident, eight migrants were transferred to the Strumica Medical Center,
where two were found to have serious injuries, and six has mild injuries. The driver
was detained.
Late on Monday, police officers stopped a truck when it joined regional road
Gevgelija-Bogdanci. During the inspection, they found 211 migrants, of whom 144
from Bangladesh and 67 from Pakistan, including 63 minors.