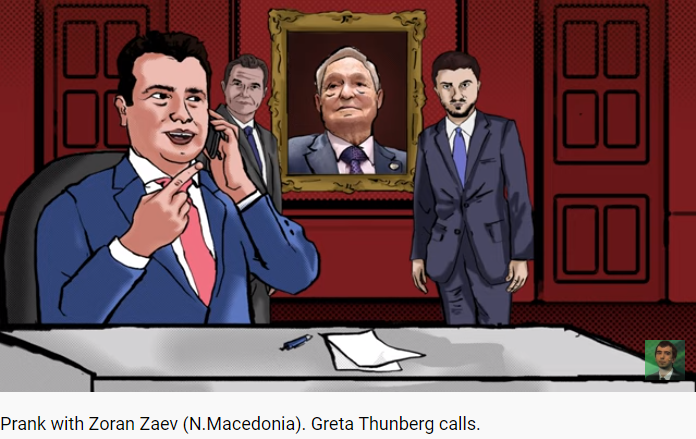 Two new recordings have been leaked online today showing former Prime Minister Zoran Zaev and the leader of the ruling SDSM talking to pranksters posing as environmental activist Greta Thunberg and her father, in which he expresses criticism at the expense of some world leaders, and in the second he admits to an interlocutor that he agreed with the former director of the Security and Counterintelligence Directorate (UBK) to stop the investigation when he was mayor of Strumica in exchange for not publishing accusations wiretapped conversations about the director.

Zoran Zaev became the target of a new international embarrassment this time by pranksters who introduced themselves as climate change activist Greta Thunberg and her father. Namely, in a telephone conversation with Zaev, they discuss several topics.

The exact setting t is not known, but it is assumed that the prank is from November of last year when the government itself and Zaev’s advisor Zabrcanec theatrically boasted that a hybrid attack was prevented.

“A hybrid attack on the government by pranksters has been stopped,” said Zabrcanec. Apparently they did not tell the truth because from the conversation that was published it can be seen that Zaev during the whole conversation did not notice that he was a victim of a prankster attack.

The conversation shows that Zaev is attacking the French President Macron, whom he agrees is a “terrible man” and shares advice that he must be more responsible. He promises to close airports due to Greta’s alleged request to stop the pollution, and then says she will allow her father to smoke marijuana in Skopje. He says it is good for migrants to be given a home and work in the country, even though they  prefer Western countries because life in this country is not very good.

In part of Zaev’s conversation with the alleged Greta Thunberg and her father, who is part of the latest prank hit, he says Macron must be a more responsible politician and agrees with Thunberg that he is a terrible man, and Greta complains that Macron is playing with the Russians.

In the second audio recording posted on YouTube, Zoran Zaev can be heard talking to an unknown interlocutor about his political activities. According to what can be heard, the head of SDSM talks about his conditions to “agree” with the then director of UBK Sasho Mijalkov, asking him for a counter-favor so that he does not publish the illegally wiretapped conversations about him.

Furthermore, a conversation can be heard in which the interlocutor asks him about the staff decisions, and Zaev mentions Petre Shilegov. On this, the interlocutor says that Shilegov is a suspicious man who “stole money” while he was chairman of the second instance commission. On this, the leader of SDSM says that he “absolutely knew that, but it is what it is”.