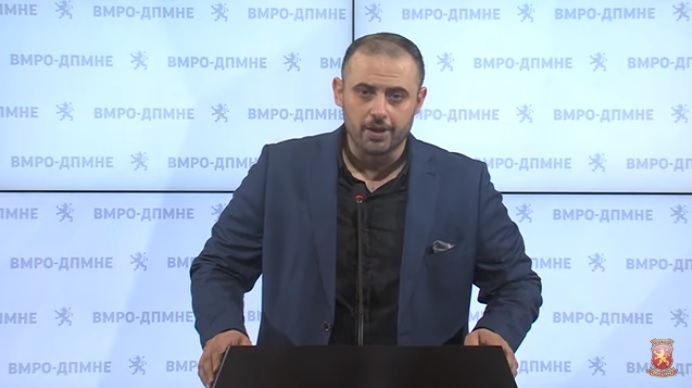 VMRO-DPMNE is negotiating to form a government and all options are on the table, claims VMRO-DPMNE Executive Committee member Orce Gjorgjievski.

Asked whether VMRO-DPMNE was negotiating with all parties, Gjorgjievski said that he would not reveal any details for the time being.

“We are in the phase of negotiations from the very beginning, the negotiations are ongoing, we have nothing concrete to say to the public. But there are negotiations, there are all options on the table,” said Gjorgjievski, referring to the same answer to the question whether a broad coalition is in play.

Asked to comment on the party leader Hristijan Mickoski’s statements that he would resign if he lost the elections, Gjorgjievski said that the question should be referred to Zaev.

“Neither I, nor any other member of VMRO-DPMNE, think that Hristijan Mickoski lost the elections. Hristijan Mickoski won in terms of won MP seats as a political party. We know that SDSM was in a coalition with Besa and if we analyze and compare the mandates that VMRO-DPMNE won as a political party on one hand, and on the other hand the coalition Besa and SDSM, we will see that the only loser who was punished by the Macedonian people and the citizens of the Republic of Macedonia in these elections was Zoran Zaev. I think it is time for SDSM to start a process of reforms within the party, to demand the resignation of Zoran Zaev and to clear the transitional remnants at the top of their party. We are ahead of good times in the Republic of Macedonia, we will need a stable opposition, and we do not see a stable opposition with Zoran Zaev, there is a need for serious changes and the question you asked I would say should be addressed to the SDSM HQ at Bihac Street”, says Gjorgjievski.