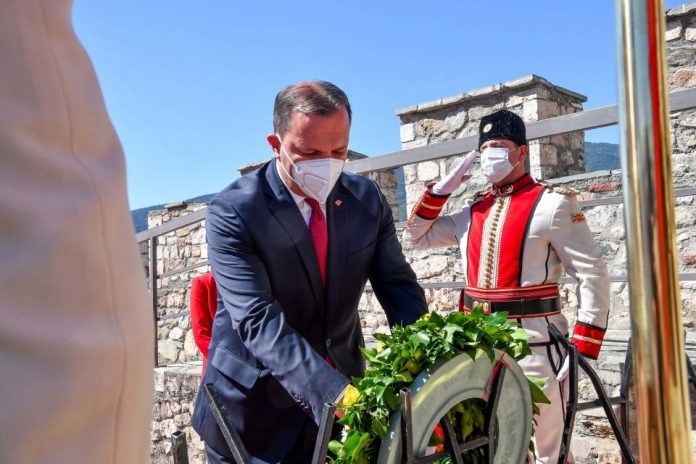 Macedonia observes Sunday its Republic Day – the 117th anniversary of the Ilinden Uprising and the 76th anniversary of the Anti-Fascist Assembly for the National Liberation of Macedonia (ASNOM). Due to the COVID-19 pandemic, the celebrations will take place without mass gatherings and cultural programmes, under health protocols established by the Commission for Infectious Diseases and adopted by the Government. “Victory for All” is the slogan of this year’s events in Krushevo, Pelince and Skopje.
The celebration of the Republic Day started early this morning with the laying of flowers in front of the memorials of the First Session of ASNOM, the revolutionary Nikola Karev and the first President of the Presidium of ASNOM, Metodija Andonov – Cento in Skopje.

In Skopje, the ceremony continued at the Skopje Fortress, where the Prime Minister of the Republic of Northern Macedonia Oliver Spasovski led a delegation accompanied by the Minister of Interior Agim Nuhiu, Minister of Finance Nina Angelovska and Deputy Minister of Education and Science Elizabeta Naumovska, and who passed flowers on the monument of Freedom – Strength, glory and victory.

Prime Minister Spasovski addressed the people at fortress Kale in honor of August 2, when the 76th anniversary of the First Session of ASNOM and the 117th anniversary of the Ilinden Uprising are celebrated after the solemn intonation of the Macedonian anthem and the performance of opera singer Elena Golomeova.

“On this day, August 2 – Ilinden, the strongest foundation of Macedonian statehood has been laid. Our struggle for freedom and justice through Ilinden in 1903, and then on the second Ilinden, in 1944, were the pillars of the Republic and the statehood. The struggle of all our Ilinden fighters was never motivated by territories or domination of a country or people over another,” said Prime Minister Spasovski.
The PM said Macedonians, Albanians, Turks, Vlachs, Serbs, Roma, Bosniaks and all others had won together, ensuring North Macedonia’s NATO membership and start of EU accession negotiations, the country that the international community declared the most successful story on the Western Balkans over the past three years.

This year, as part of the official programme for the solemn celebration of August 2 – 117 years of Ilinden and 78 years of the first fight of the Bitola-Prespa partisan detachment “Dame Gruev” – were celebrated in Smilevo.