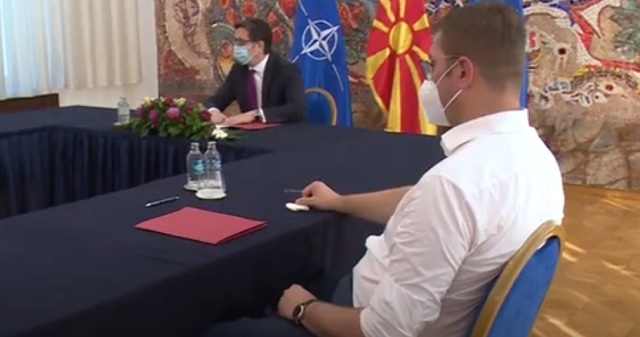 VMRO-DPMNE freezes relations with President Stevo Pendarovski and will review the policies towards the President’s Office, said the leader of VMRO-DPMNE, Hristijan Mickoski on Thursday following the meeting with the President with several of the party’s MPs until they see, as Mickoski said, that he is the president of all citizens.

“As of today, VMRO-DPMNE is freezing relations and communication with Stevo Pendarovski and will reassess policies related to his Office. Unfortunately, as many times in the past, institutions have been privatized and captured for personal and partisan interest, at the expense of the people’s interests. Today, MP Zoran Zaev received the mandate after assuring President Pendarovski that he would work on achieving a parliamentary majority,” said Mickoski after a meeting in the President’s Office.

Pendarovski told Mickoski that Zaev had assured him that he would secure a parliamentary majority, but according to Mickoski, that was not enough proof for giving him the mandate.

“As arguments, the President said that the Parliament was constituted, citing the examples from 2006 and 2016 and that he was assured that Zaev would secure a majority,” said Mickoski.