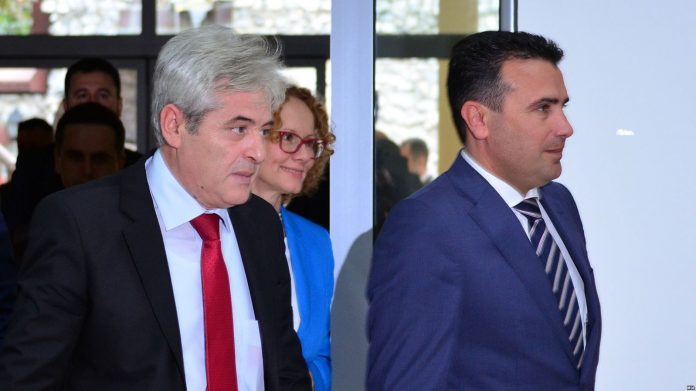 SDSM denied the news published on Kanal 5 TV, and then shared by several media, that a prime minister has been agreed on the principle of 3 + 1.

“It is not true that in the talks between SDSM and DUI an agreement was reached between the Prime Minister on the principle as announced, that is untrue. It is also not true that any personal solutions and division of departments have already been agreed. SDSM is at the disposal of the media, and expects in the spirit of professional journalism, for such issues to seek official confirmation from the party, or position, before it is published. In this way, incorrect information is placed in the public, and the citizens are misled. SDSM informs the citizens in a timely manner and if there is an agreement, it will announce it publicly,” said the SDSM Center for Public Communications.

An agreement has not yet been reached between DUI and SDSM on the composition of the new government, said Ali Ahmeti’s party.

Earlier, Kanal 5 TV, citing its own sources from the negotiating teams of both parties, announced that SDSM and DUI agreed for Zoran Zaev to be prime minister for three years, and Naser Ziberi for one year.

Friday marks the first of twenty days that Zoran Zaev as prime minister-designate has at his disposal to collect 61 signatures to form a government.  President Stevo Pendarovski handed the mandate to the SDSM leader one day earlier, after he had a telephone conversation with him, although Zaev did not provide signatures of a total of 61 MPs.