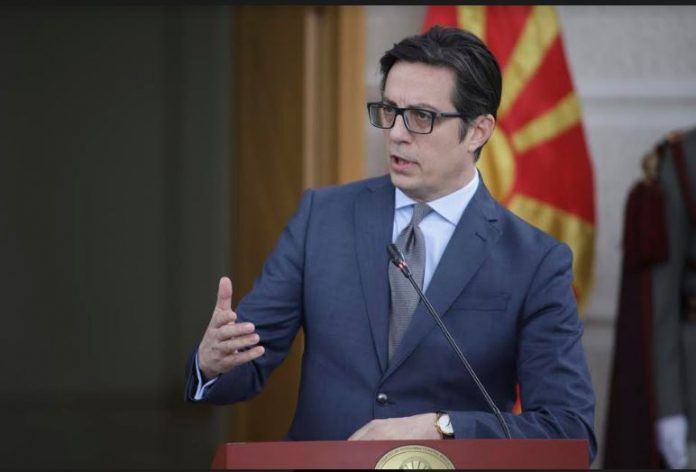 President Stevo Pendarovski addressed via video speech the high-level event “The future we want, the United Nations we need: reaffirming our collective commitment to multilateralism,” which took place Monday in New York on the 75th anniversary of the United Nations.

“The creation of the United Nations is a monumental global achievement of humankind. Yet, world organization can be as effective as the member states will allow it to be,” Pendarovski said.
“In 1945, nations were united by the vision to protect future generations from the cruelty of war,” he pointed out. “They laid the foundations of the new international order, which put the humans at its core, not just states and their alliances.”

President Pendarovski lauded the organization, saying that over the past 75 years, the United Nations have been the cornerstone of international law and the multilateral system.

“The United Nations have prevented numerous conflicts and mitigated consequences of many humanitarian crises. The UN has helped many colonized nations to gain their independence through self-determination. Millions of people have risen from poverty and were protected from violence in the past 75 years,” Pendarovski added.

The head of state noted that through the Universal Declaration and many international treaties and conventions, the UN have encouraged the global movement for human rights, for social justice and equality, strengthened resilience to disasters and mobilized humanity in fighting climate change.

According to Pendarovski, due to known obstacles to the organization’s work, there are still tensions and conflicts around the world, millions of refugees and migrants, uncontrolled exploitation of natural resources and denigration of human dignity. New dangers have joined the old ones, such as religious extremism, transnational organized crime and the digital divide.

“This year, the state of affairs got even more complex due to the pandemic of COVID-19. Apart from the immense suffering it provoke, the pandemic has made more visible the shortcomings of the international order and the systemic inequalities of our world,” Pendarovski lamented.

“We have only ten more years to realize the Agenda 2030 and the Paris Climate Agreement,” he continued. “In order to complete the Sustainable Development Goals, we have to restore economic and social damages from the pandemic. This is within reach, but, only through multilateralism, international cooperation and global solidarity which requires strong and effective United Nations, reformed and ready for the new reality.”

The President noted that since its independence, N. Macedonia has experienced the benefits and the challenges of the United Nations.