Home Macedonia Geer: Reforms on all fronts, most importantly in rule of law as... 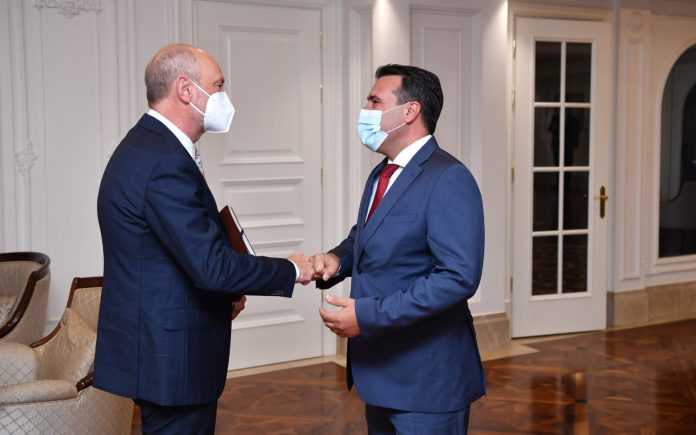 I can assure you that you will find the EU Delegation and its dedicated staff by your side, continuing helping with resources and expertise, all in the name of our common goal – to see North Macedonia become part of the EU, said EU Ambassador David Geer at Wednesday’s press conference with Prime Minister Zoran Zaev , which took place in the Government of RNM.

“We are all looking ahead to the formal start of the country’s EU accession negotiations at the Intergovernmental Conference. Let me recall that for the country to be at this stage of its EU integration process, it means that already a lot has been achieved, both when it comes to reforms, but also in terms of solving bilateral disputes with its neighbors, where we recognize that North Macedonia is an example for the entire region,” Geer said.

He said he stressed the importance of developments in other sectors, including upholding democracy and defending human rights, protecting the environment and forging a vibrant and sustainable economy. “These are crucial elements for bringing about a tangible positive change in the lives of citizens. Progress in these areas would mean bringing the EU into North Macedonia, which is essentially, what the accession process is all about,” the EU diplomat stated.

This is the first meeting with EU Ambassador David Geer, whose mandate as Head of the EU Delegation to the Republic of North Macedonia is four years.