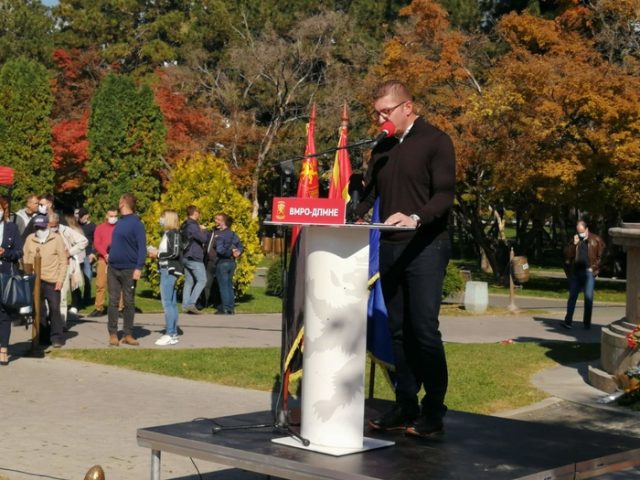 Today we have a state, but we don’t have freedom. The fortress built by the revolutionaries is being demolished piece by piece by SDSM, said the leader of the opposition VMRO-DPMNE Hristijan Mickoski at Friday’s protest in front of the monument of VMRO.

“Macedonia must start the EU accession negotiations as soon as possible, the intergovernmental conference should take place as soon as possible. This is our only future and VMRO was created as a result of pro-western attitudes, because when many in Europe had talked about monarchies and kingdoms, VMRO fought for a republic on the Balkans. Macedonia gave thousands of victims in the struggle against fascism and the fight against the bloody part of communism. Macedonia is the bulwark of Europe. Europe has the future of this people and country in its hands, regardless of Zaev’s political impotence and incapability to recognize the strategic moment. EU should unconditionally start negotiations with Macedonia as soon as possible. This is the only way to have a goal, which is to move the country forward” said VMRO-DPMNE leader Mickoski.