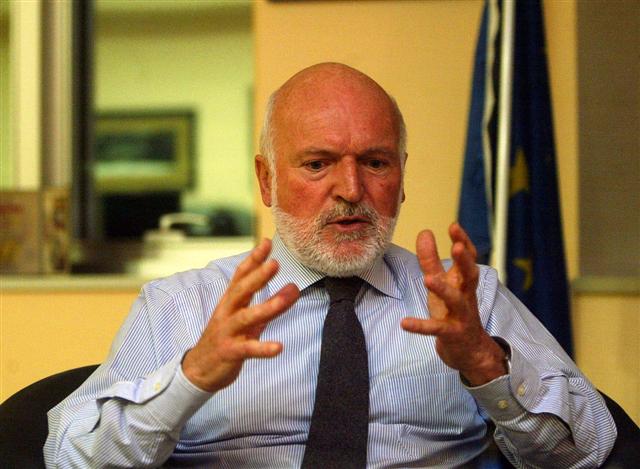 The tactic of the Bulgarian government toward North Macedonia is quite irrational and counterproductive and could have serious consequences affecting not only the relations of the two countries, but also the whole region and the EU enlargement policy, former EU ambassador to Skopje Erwan Fouéré has said.

The Bulgarian government’s approach is sending a bad signal to the countries in the Western Balkans that they too could have their EU integration process blocked, he says in an interview with the Bulgarian National Radio.

“Bulgaria has been using its EU membership to impose its interpretation of history all the while insisting that its version has to be accepted by the others before starting accession talks. It’s quite counterproductive because it is underestimating the EU’s enlargement policy, going totally against the principles on which European integration is based, which had been accepted by Bulgaria when it joined the EU in 2007,” stresses Fouéré.

The issues Sofia has been raising, including territorial integrity, national identity, the existence of national minority and the interpretation of history, according to him, are real problems existing not only between Bulgaria and North Macedonia, but also in a wide context across Europe.

The process of European integration, the former EU diplomat notes, has been designed to settle such issues and to promote reconciliation through cooperation rather than being imposed.

According to him, the Skopje-Sofia Friendship Treaty sets a good example how two neighboring countries can work together and lay common foundations to trust each other. It, however, takes time.

“The 1998 Belfast Agreement is still being implemented 20 years later. That’s why I think it’s irrational for Bulgaria to believe that everything envisaged in the agreement should be implemented the next day after the signing. It takes time, it takes discussions, educational and multidisciplinary commissions should convene. All of this would be terminated after the enlargement process is blocked,” Fouéré says.

If Bulgaria doesn’t veto the process and allow accession negotiations to begin with North Macedonia, the diplomat says, it’ll send a positive signal suggesting Sofia views the process as cooperation.

“There are rulings of the Court of Human Rights of the Council of Europe, which had been established for the purpose of making sure that both North Macedonia and Bulgaria honor it. We cannot ignore the fact that the Strasbourg-based court has handed out rulings involving the existence of national minorities in Bulgaria. The EU, where Bulgaria is a member, is based on rule of law. The issue of national minorities isn’t exclusive in the Balkans, there are such issues across the EU – Catalonia, Wales, Scotland. However, there are processes aimed at solving them, not by force, but through cooperation,” said Erwan Fouéré, former EU ambassador in Skopje.