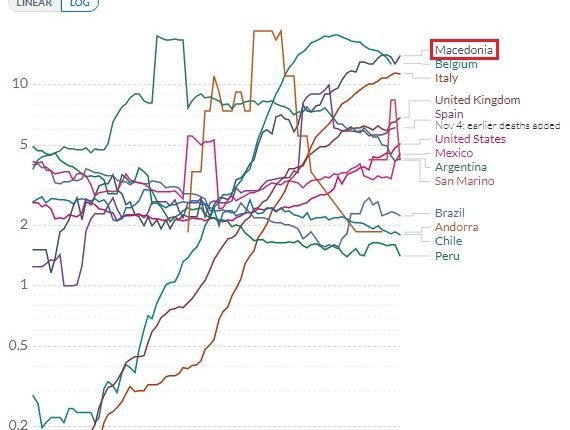 Macedonia has the highest number of deaths in the past week, according to world statistics.

With these facts, Professor Dejan Trajkovski from the University of Bitola, who analyzes COVID-19 epidemiological situation on a daily basis, contradicts the statement of Minister Venko Filipche that mortality rate is high everywhere, and that a curfew in the country would not contribute to reducing the numbers.

“Filipche said today that mortality was high everywhere and that there was no need for curfews and other measures. I have to immediately deny it with facts. The diagram below shows the current seven-day averages of the daily death toll per million inhabitants of 13 countries with the highest cumulative death toll since the beginning of the epidemic to date, also per million inhabitants. FIRST IN THE WORLD! It is clear that with this pace Macedonia will reach and overtake the countries that are higher than it on the list according to the cumulative mortality. Will anyone stop this man who causes general danger in the country, suffering and dying with such irresponsible statements? Here is the graph and the source of information (the official world database for Covid-19), let him analyze it shortly before appearing in front of the cameras and misinforming us again,” Trajkovski wrote on Facebook.