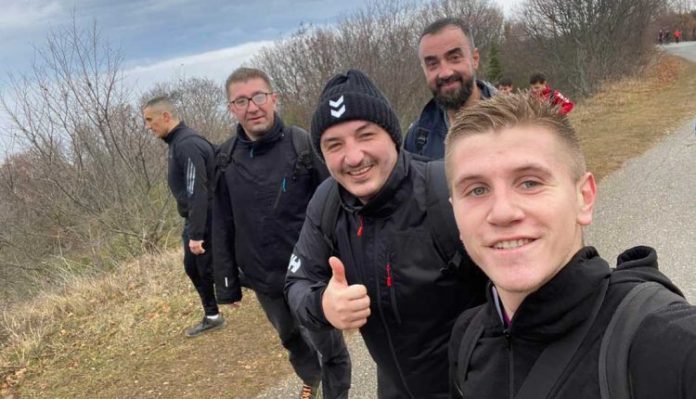 Official, wearing suits, on rostrums, giving statements, press conferences, political meetings and meetings. This is how the public usually knows and remembers politicians. But what is the other side of politics, the human side.

Among the numerous work responsibilities and activities, VMRO-DPMNE leader Hristijan Mickoski finds time for sports. As he himself says, he climbs Vodno two to three times a week, and spends the same amount of time in the gym. He loves basketball and cheers for Rabotnicki, and in the New Year’s interview for Alfa TV, he reveals that his idol was Toni Kukoc.

Mickoski says that as a child he spent a large part of the time with his grandfather Stojan. He reminisces of the walks in the City Park, near the city stadium, Luna Park. He says that he lived a good family life, with many relatives. He learned the first letters from his grandfather, who he says wrote the Bible for children, which is still sold in the Cathedral.

“He practically taught me to write the first letters, the first math equations, and so on. And he really had a wonderful handwriting. And all that was written on a sheet of paper, normally processed by computer and as a family we financed that edition of the bible for children, I think that it still can be found in the cathedral church downtown Skopje,” Mickoski told Alfa TV.

Mickoski is a university professor, a mechanical engineer. He received his PhD in artificial intelligence and did the practical part in Germany.

“When they talk about artificial intelligence today, let’s just say I can boast that I have a PhD degree in fuzzy logic, it’s artificial intelligence, you have genetic algorithms, fuzzy logic and neural networks, and I used one of those three algorithms in my doctoral dissertation,” Mickoski said, adding that he completed the experimental part at a university in Germany.