Home Macedonia Spasovski annoyed by MP questions: No one has negotiated with Mijalkov 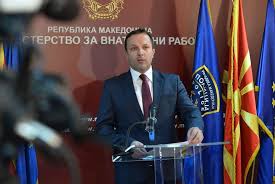 Interior Minister Spasovski claims that no one is negotiating, or has negotiated on anything with Mijalkov for him to report himself to the authorities, adding that the verdict due on Friday is the court’s job and it will remove all possible dilemmas.

“Absolutely, we have shown now and from the beginning when the proceedings were opened, that there must be justice for everyone in this country, regardless of who he is and what position he holds. And what the institutions have done now with the arrest of Mijalkov and the inability to escape justice. In fact, no one escaped from justice and if none of them escaped and did any harm to the citizens and the country, they will not avoid facing justice. In that part, we must be clear,” said Spasovski.