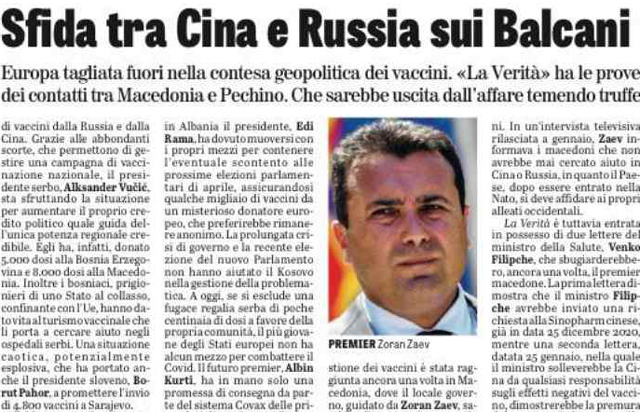 Italian daily newspaper La Verita has revealed a new scandal involving Zaev and Filipche’s vaccine procurement. This time in a new article entitled “Battle between China and Russia over the Balkans.” The EU is left out of the geopolitical fight against vaccines. “La Verita” has evidence of contact with Macedonia and Beijing, which left the deal fearing fraud. The raticle states that Zaev was be initially rejected by Beijing because he went through an intermediary phantom company with unstable foundations in Hong Kong.

“…But the culmination of poor management and procurement of vaccines occurred once again in Macedonia where the government led by Zoran Zaev is ready even at the expense of the health of citizens to fight for their salvation. In a TV interview in January, Zoran Zaev informed Macedonians that he would never seek help from China and Russia because the country, after joining NATO, would have to rely on its Western allies. “La Verita”, however, received two letters from Health Minister Venko Filipche, which once again unmask the Macedonian Prime Minister. The first letter proves that Minister Filipche sent a request to the Chinese Sinipharm on December 25, 2020, while another second letter from January 25, 2021, says that the minister would even free China from accountability for any negative effects of the vaccine. This confirms the Balkan government’s pressure to finalize the agreement. Zaev later admitted that he had addressed Beijing, but at the end of February this year, communist Beijing refunded the advance. The reason for this, according to La Verita sources, is that the deal was to take place through a phantom company based in Hong Kong, which is also stated in all official letters of the minister. The fact that a private company, which according to initial analyzes does not have a solid foundation, but has sufficient funds deposited in the German Deutsche Bank, was involved by the Macedonian government in the mediation, left official Beijing suspecting that they may be facing an attempted fraud, and this until the procedure is annulled,” reads La Verita’s article.