Zaev and the most criminal government in Europe have started the process of privatization of the Customs Office, in order to get their work done and to stuff their pockets, said VMRO-DPMNE’s Gordana Dimitrieska-Kochoska at today’s press conference.

“Also, will the introduction of this system again burden the business community with new costs and how much will it cost a company to install, use and maintain such a system. The government justifies the introduction of this system that it is in the interest of reducing the shadow economy, but in fact it is completely the opposite because this system has no mechanism to control the illegal sales of excise products, and the company that will operate it will not have the authority to sanction illegal sellers of excise goods. In fact, this system will only additionally burden regular excise payers, and instead of speeding up the flow of goods and services, it will further burden companies with additional bureaucracy and fixed costs. The government has not stated how this system will control the transit of excisable goods, which is one of the most important segments in international trade and where catastrophic abuses are possible. That is, the only strength of the SDSM Government is the smuggling of excise goods, and through this system they plan to legalize their candy business,” says Dimitrieska-Kochoska. 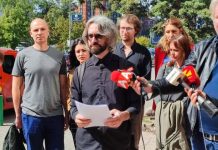