Home Macedonia Burke: Look out for assertive neighbors and implications from countries like China 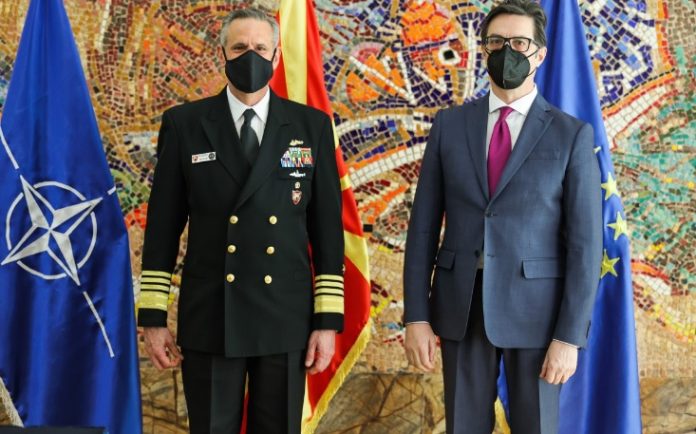 You have demonstrated courage, determination and persistence. I am proud to be on the same team with all of you, and the entire Alliance is stronger through your membership, we are all stronger together, said Admiral Robert Burke, Commander of the NATO Allied Joint Forces Command Naples, at the ceremony marking the first anniversary of North Macedonia’s NATO membership at the Skopje-based Ilinden army barracks on Saturday.

Admiral Burke said the Alliance is stronger because of North Macedonia’s shared principles and values, and “your commitment to the ideals of freedom and democracy, and your resolute determination to ensure peace and stability.”

“I know that you will build upon these impressive capabilities that you already have, and your unique expertise is going to be a phenomenal contribution to the Alliance. I know that you are going to also serve as a shining example to other nations following in your path,” added Burke.

He said that the country had long been a partner and contributor to NATO and Euro-Atlantic security.

“Since those early days, your commitment to the Alliance has been demonstrated time and time again. North Macedonia aggressively seeks out ways to contribute to the stability across the region and beyond, through numerous efforts, things like your troops’ deployment to Kosovo and Iraq, and to NATO’s Resolute Support in Afghanistan,” said Burke.

He said that external actors and assertive neighbors remain active with direct implications to regional security.

“Yet, our unshakable commitment remains, that every country must be free to choose its security arrangements, and that includes whether to join or not to join any treaty or any alliance like NATO,” said Burke and added that more work should be invested in understanding the implications from countries like China for our security, furthermore seeing the enduring threat of terrorism.