Home Macedonia Mickoski: The “Mafia” affair proved that the government is in alliance with... 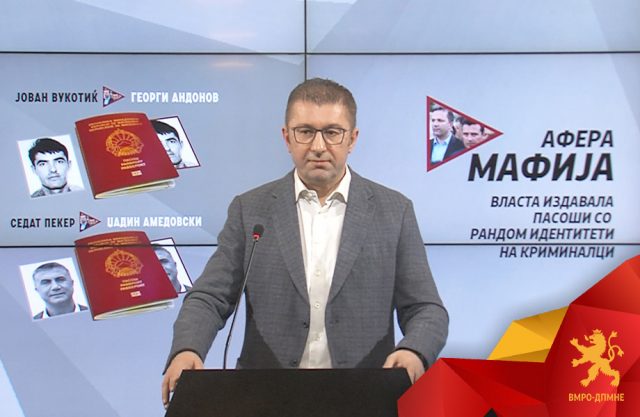 VMRO-DPMNE leader Hristijan Mickoski, announced at today’s press conference that he would send to the Prosecutor’s Office all the documents about the “Mafia” affair, which they received through whistleblowers and that they demand an express reaction.

Mickoski said that the affair confirms that the government is in alliance with the mafia and that this not only has a negative impact at home, but is also reflected regionally.

He submitted evidence that the two, as he said, members of high mafia structures Jovan Vukotic and SedatPeker, received Macedonian passports with foreign identities.

Mickoski says that in order to issue these passports, one should enter a police station and that this is a slap in the face to the state and proof of the close connection between the mafia and the government. The leader of VMRO-DPMNE called on the media to investigate the “Mafia” affair, because, as he said, there is pressure on the media to keep silent about this scandal.