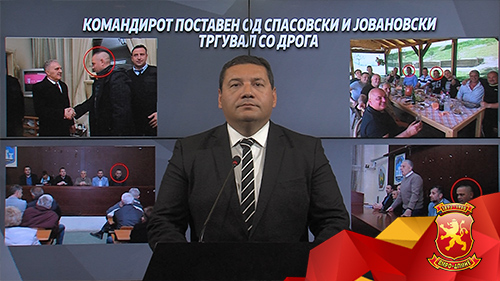 It is a openly known secret that chief of the Prilep police station Kire Spirkoski, who was arrested for drug trafficking, is one of the closest associates of Interior Minister Oliver Spasovski, Prilep Mayor Ilija Jovanoski and is one of the most prominent SDSM staff in Prilep. Crime produces more to crime, says MP Petar Risteski.

Police Chief Spirkoski, now a suspect of drug trafficking was illegally appointed to the position because he had an inadequate education. Spasovski then put the party above the state interest. Chief Spirkoski can be seen in the company of Minister Oliver Spasovski, Prilep Mayor from the ranks of SDSM Ilija Jovanoski, MP and head of the municipal organization Mile Taleski, as well as former Minister of Transport and Communications, and now director of customs Goran Sugareski, says Risteski.

Minister Spasovski should resign because his police chief and close associate trafficked drugs, the MP added.