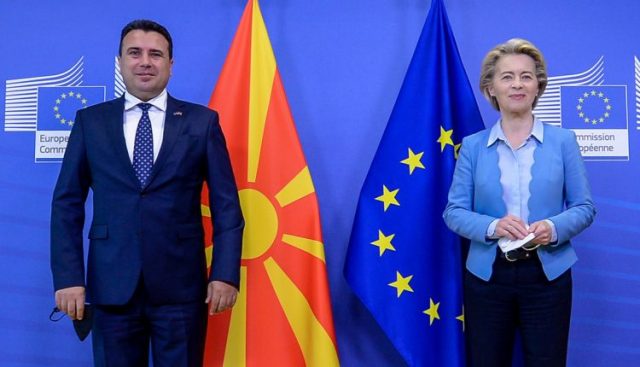 The President of the European Commission Ursula von der Layen at the meeting with the Prime Minister ZoranZaev today in Brussels confirmed that she is committed to North Macedonia and Albania to continue the negotiations together without further delay.

She added that the EC will be even more involved with a substantial and committed engagement because this is a very important process that must not delay the start of negotiations with North Macedonia for EU membership.

Prime Minister Zaev stressed that the Macedonian language and the Macedonian identity imposed as issues by Bulgaria should not be the topic of talks and the engagement of Brussels and that North Macedonia will only continue to discuss its European future, said the Government.

“Macedonian identity, in addition to being a matter of pride, is also a matter of facts, science, tradition and national symbol of our people. He is not and will not be the subject of negotiations. “European values ​​are a guide for us, but identity protection is also a European value,” Zaev said at a meeting with EC President Von der Layen.