Home Macedonia Palmer: When leaders steal from the citizens they undermine the rule of... 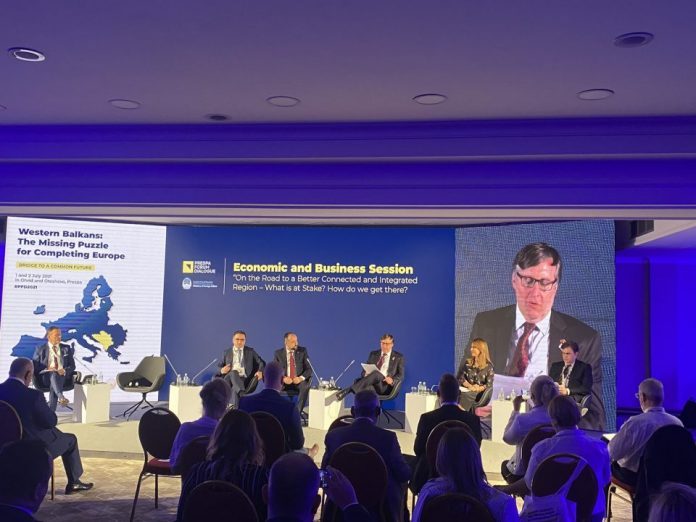 The United States is disappointed that the issue of opening the first intergovernmental conferences for Macedonia and Albania wasn’t resolved despite the strong advocacy and reasonable solutions by the Portuguese EU Presidency and the major European partners, Deputy Assistant Secretary at the US State Department’s Bureau of European and Eurasian Affairs, Matthew Palmer, told Thursday’s panel “On the Road to a Better Connected and Integrated Region – What is at Stake? How do we get there?”, held as part of the First International Conference within the Prespa Forum Dialogue.

Palmer underlined that this also affects US and EU investments in the region, and contributes to increasing skepticism in the region itself.

“Our geopolitical competitors aggressively seek to undermine the credibility between the US and the EU, and the region itself doubts the integrity of our collective commitment,” Palmer said.

Palmer highlighted the importance of the historic Prespa Agreement signed between Macedonia and Greece, as well as the Friendship Treaty with Bulgaria, which he pointed out as examples of Macedonia’s greater regional engagement for the benefit of its citizens.

In terms of economic reforms, he said the region must reform the energy sector, which would not only bring economic benefits, but strengthen regional economic security, seeing that the region is losing a significant number of highly skilled workers.

“In addition to economy, citizens in the region are most concerned about corruption. Anti-corruption is the basis for preserving and strengthening democracy. When political leaders steal from the citizens of their country, and undermine the rule of law and independent judiciary, economic growth slows down, inequality spreads, as well as inequality in access to services. Therefore, reforms shouldn’t be designed only to revive the economy post-COVID-19. They must also be aimed at strengthening democratic institutions to make them more independent and transparent,” Palmer said.