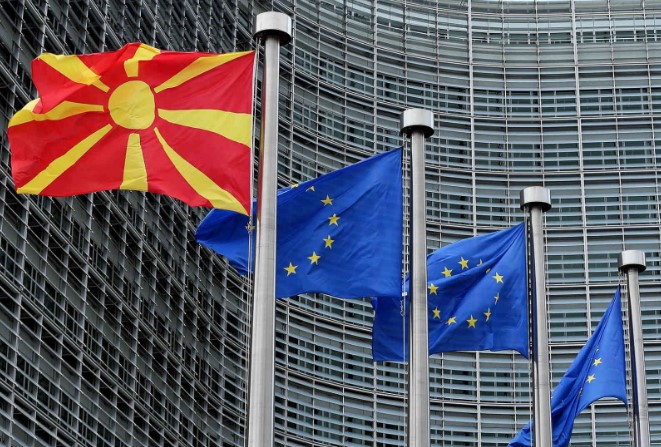 Deputy PM for European Affairs Nikola Dimitrov, at Slovenia’s request, held a video meeting on Wednesday with the State Secretary at the Ministry of Foreign Affairs of Slovenia, Gašper Dovžan, discussing the priorities of the Slovenian EU Presidency in the next six months and the inclusion of North Macedonia’s European file in that context.

“The European perspective of North Macedonia and the region is not only in the interest of this part of Europe but also the geostrategic need of the Union in this crucial period, clearly recognized in Brussels and in the capitals of the member states. It also corresponds to the priorities of our Slovenian friends for a credible and stable EU as an expression of the European unification process. It becomes impossible to maintain the European influence without the European side keeping their word – the start of the accession negotiations for those who delivered, as is the Macedonian case,”Dimitrov said, reads a press release of the Secretariat for European Affairs.

In this regard, Dovžan stressed that the region is included in the three pillars of the Slovenian EU Presidency and the enlargement process will be highlighted as a horizontal issue for the future of Europe. Special attention will be paid to continuing the efforts of the German and Portuguese presidencies to overcome the obstacles to holding the first intergovernmental conference with North Macedonia and continuing the dialogue with Bulgaria in accordance with the European principles and values.

The Slovenian Presidency, adds the press release, has sent an invitation to Deputy PM Dimitrov to attend the informal meeting of the EU General Affairs Council, which will be held on July 22-23 in Brdo near Kranj.

Interlocutors also highlighted the excellent bilateral cooperation expressed through the technical assistance that North Macedonia receives from Slovenia in terms of alignment with the European standards and policies, and alignment of the national legislation with the EU acquis.