Home Macedonia Citizens will punish the incompetence and lies of the SDSM-led government in... 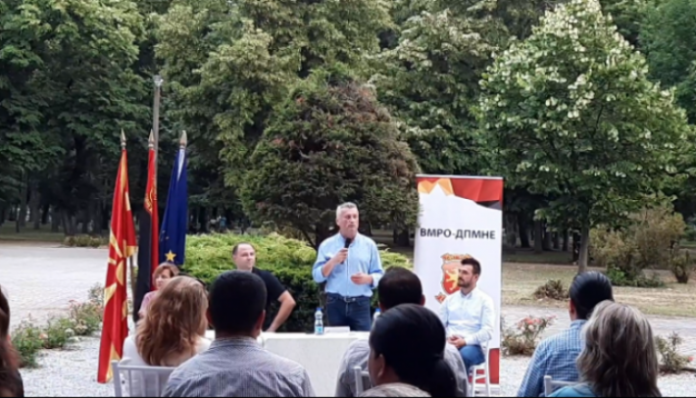 The government lied about many things, including the chimney that was to be built on REK Bitola, which they lied about, saying that there would be reconstruction of REK Bitola, now they say they will close it, better infrastructure should have been done in Bitola, there were promises that The entrances of the city will be improved, as well as the construction of the highway Gradsko-Prilep-Bitola for a European Bitola, but we have not seen anything from all that in the past four years, said VMRO-DPMNE Secretary General  GjorgijaSajkoski at the forum held in Bitola on Monday.

Sajkoski mentioned in front of the people of Bitola that the current government did not fulfill the promise for construction of a Clinical Center in Bitola, pointing out that their incompetence, negligence and unemployment resulted in 5,600 citizens dying or, as he said, one less city in Macedonia.

“For Bitola, the current government promised other projects related to healthcare, but we saw how they work in the healthcare sector because their negligence led us to have one city less in Macedonia or 5,600 people less today and only because of their negligence. It is a result of their inactivity, and they promised here that they would build a Clinical Center in Bitola,” said Sajkoski.

The Secretary General of the opposition party stressed that this rule of the SDS-led Government can be punished already in the next local elections scheduled next autumn.

“Such a government must and can be punished only in elections, so together you, we and everyone will bring victory here in Bitola and victory in Macedonia in the next local elections,” said Sajkoski.