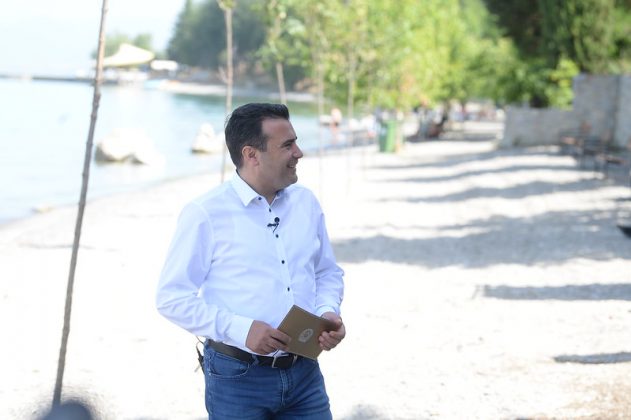 Prime Minister ZoranZaev today from Ohrid said that the demolition of illegal buildings in the Ohrid region must be carried out in accordance with the laws and in compliance with the prescribed procedures, announcing that the process of removing illegally constructed buildings on the shore of the lake will continue.

Regarding the process itself, he said that it is not easy at all, that there are certain court decisions that complicate it, but that institutions at all levels remain focused on fulfilling the envisaged procedures.

“Freedom and democracy live and are celebrated in our country… We really follow the laws. The central government is in the background, with support not only in the statements, but we also financially support everything. Because in moments when you come to such challenges, you centralize the government again for any reason, that is a bad message for the citizens. Our intention is to decentralize, to release additional new competencies, and even those that the mayor and the Council have to let the local communities, to get there, to reach the citizens. From that aspect, we want all procedures to be conducted in accordance with the laws,” Zaev said.

The Prime Minister praised all that the Ohrid local government has done in dealing with the problem of illegal buildings.

“It is not easy, somewhere you have to brag to the courts as appellate instances because moves are made, outside the law or whatever will return the procedure. That is why we must be focused on all institutions in accordance with their competencies. The local government is doing its job here in Ohrid, the central government is doing its job, and the judiciary may fail in certain parts,” Zaev said.