Home Macedonia Zaev on Ohrid Framework Agreement anniversary: We should be proud of the... 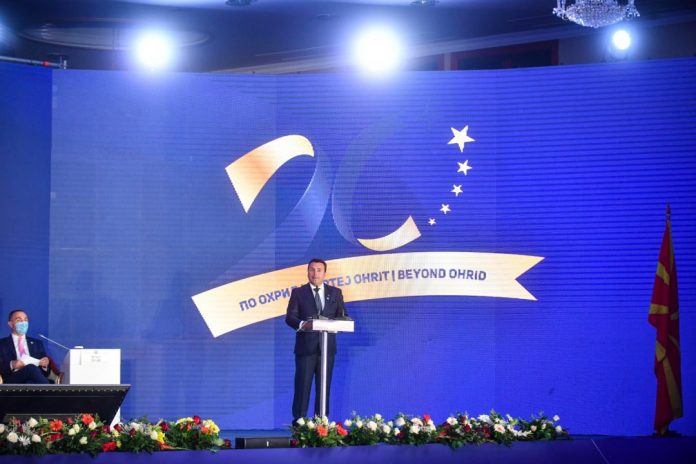 We are marking a significant anniversary – of the agreement that secured North Macedonia’s peaceful future and further democratic development […] The agreement laid the foundations on which we, since 2017 as a newly formed government, have been building our common, one and equal society, equally including and respecting every citizen’s ethnic identity and interests, said Prime Minister Zoran Zaev in his address to the “After Ohrid” conference held to celebrate 20 years of the Ohrid Framework Agreement.

After Ohrid, PM Zaev said, the country had been implementing healthy policies and instead of conflicts, the topics now being discussed were the country’s economic progress and good neighborly relations as well as creating an Open Balkans with neighboring countries.

“After Ohrid,” Zaev said, “all of us together — regardless of our ethnic, national, religious, social, and cultural affiliation — we have built this equal society where everyone can find prosperity and a better future. I’m glad that after 20 years we are discussing all these good outcomes.”

All ethnic communities, he added, should be proud of the country for being a role model for others to learn from.

“Bringers of peace, a role model many other countries and regions, not only in the Balkans and Europe but also in the world, can learn from,” Zaev said.

“Let’s safeguard what we have achieved together over these 20 years and be grateful to the modern world from which we have learned a lot and which has helped us a lot. It is the western world that was here 20 years ago and that’s here today, giving us support; our strategic partners, first of all: the USA and the EU”, stressed Zaev.