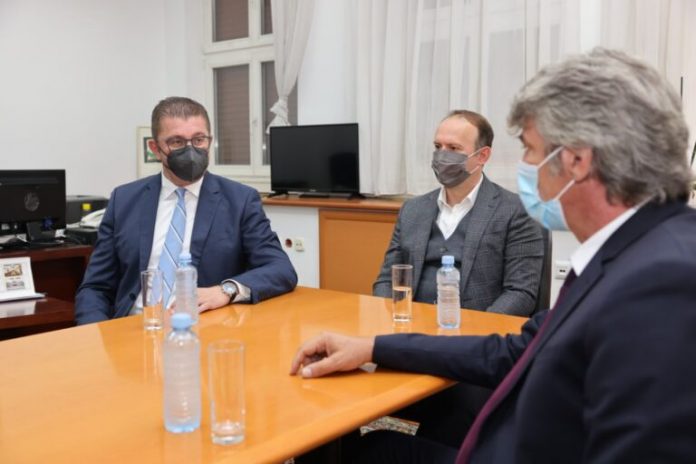 A cooperation agreement was reached between the opposition parties VMRO-DPMNE, the Alliance for Albanians and Alternativa, after party leaders Hristijan Mickoski, Zijadin Sela and Afrim Gashi cut a deal today to support each other in several municipalities ahead of the October local elections.

As stated in the joint party statement, the three leaders agreed not to run for mayor in certain municipalities, and in other municipalities to compete with all other parties.

“It is necessary to cooperate in order for the municipalities to be institutions in the service of the citizens, with strong and balanced local economic development, with budget support for decentralization in the fields of education, culture and sports, as well as striving to be green municipalities that will provide clean air and environmental protection. In order to better articulate the opposition vote, as well as to best represent the interests of all citizens at the local level, the three presidents, emphasizing these principles, decided on mutual cooperation and support of mayoral candidates. The cooperation means that the mentioned parties will not run for mayor in certain municipalities and will support each other, and in other municipalities will compete with all other parties. “The manner and details of the cooperation will be agreed upon by the municipal organizations of the three parties,” the joint press release reads.

The three party leaders, according to the press release, stated that based on the report of Transparency International, according to which Macedonia is ranked in the worst 111th place, opposition cooperation becomes inevitable, in order to free local self-government units from corrupt rule, non-transnational of money and abuse of power by SDSM and DUI at all levels of state administration.