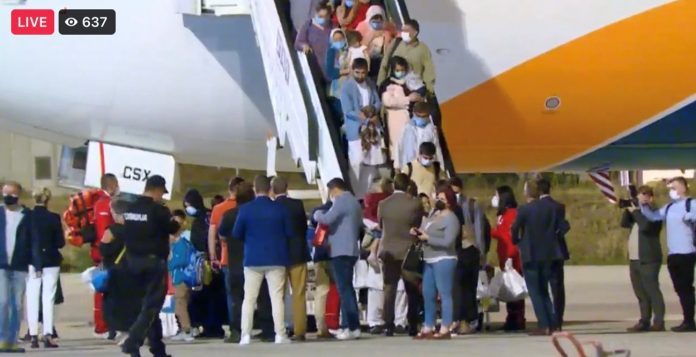 The first group of Afghan civilians arrived at the Skopje International Airport Monday night on a Kam Air flight from Tbilisi, Georgia. The first woman off the plane was in her 39th week of pregnancy, Foreign Minister Bujar Osmani said. She was immediately taken to the Clinic for Gynecology and Obstetrics for a check-up. Another person fainted and was taken to hospital by a different ambulance unit.

According to Minister Osmani, who welcomed the 149 citizens of Afghanistan, the country has shown solidarity to people whose life was in danger and who “arrived with tears in their eyes filled with happiness because they found a place where they will be safe for at least the next 90 days,” he said.

Osmani added that the country will shelter around 750 citizens who were employees, associates, and their family members, of the Open Government Partnership – OGP international organization, to which Macedonia is officially a member, as well as associates of Transparency International, the World Economic Forum, and other international organizations and democratic institutions they had been working for over the past 20 years.