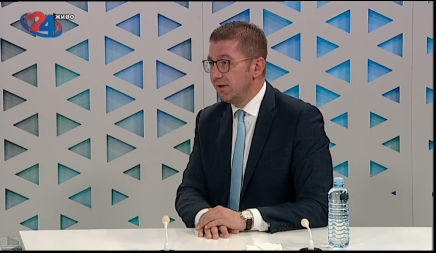 What is important is to say that the government and the State Statistical Office are responsible for the legal and accurate conduct of the census, everything else in this process is folklore, says VMRO-DPMNE leader Hristijan Mickoski in today’s interview with TV 24, commenting the beginning of the census.

“What VMRO-DPMNE did at the beginning of this year was practical to postpone the census at that time and then the census was postponed to be realized now, in September. Why? Because we are now realizing the census, we can control it immediately during the local elections, because now in the local elections we will have fingerprint terminals and that will be our first indicator whether the government and the SSO have completed the census properly,” said Mickoski.

He sent a message to the Macedonian citizens participate en masse and not to boycott this process, i.e. as he told the citizens, not to believe in those national structures that are trying to create discord among the Macedonian fabric again and thus to continue the political career of Zaev and SDSM.