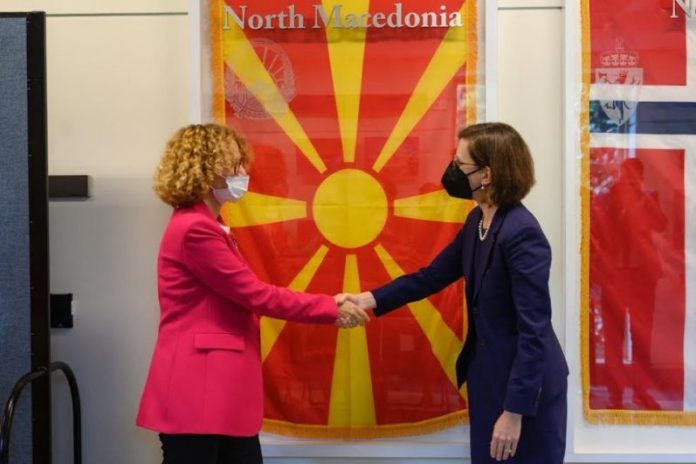 A ceremony unveiling the Macedonian flag was held in the Pentagon’s NATO Hallway as it joined the flags of 29 other NATO allies.

Pointing out that Macedonia’s NATO accession has strengthened peace and stability in the region, Cooper thanked Shekerinska for her personal commitment to NATO membership and the major contribution in the development of North Macedonia – United States ties, the Ministry of Defense said in a press release.

The ceremony was also attended by the US Ambassador to North Macedonia Kate Byrnes, who said the country’s NATO membership is crucial for the stability and progress in the region. Byrnes congratulated Shekerinska on her leadership and vision in achieving the country’s strategic goals.

Shekerinska, reads the press release, noted that the big success of the country’s NATO accession was a result of strong political courage, 30 years of hard work, and constant support from friends like the United States. “Thank you for believing in us,” the Minister said.

Acting Assistant Secretary of the Bureau of European and Eurasian Affairs Maureen Cormack, Director of the Defense Security Cooperation Agency, Heidi Grant, as well as officials of the Pentagon, the Embassy of North Macedonia in Washington, and the US Embassy in Skopje.