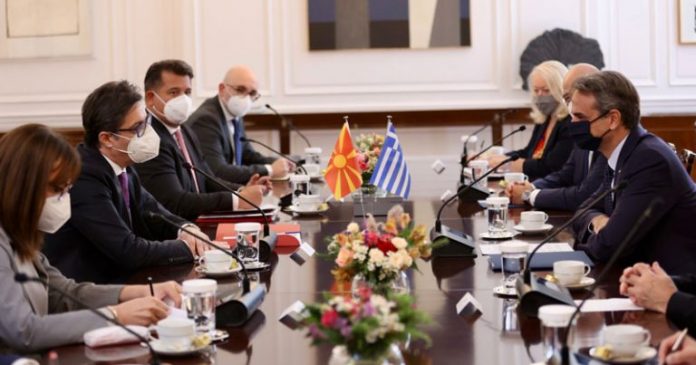 President Stevo Pendarovski thanked Greek Prime Minister Kyriakos Mitsotakis for Greece’s strong support for the Republic of Northern Macedonia’s aspirations for membership in the European Union, saying that unblocking the process would contribute to the stability and progress of the entire region during the first official visit of the Macedonian President to Athens.

The President’s Office has said that interlocutors exchanged opinions on bilateral relations and noted that the official visit is a landmark event in their development.

Pendarovski said there is a visible improvement of bilateral relations after the signing of the Prespa Agreement, with a potential for further enhancement of cooperation in all fields of mutual interest, saying the countries’ potential should be utilized to build real strategic partnership.

“To hold a first meeting at the highest political level after 30 years between two countries that are immediate neighbors is a major thing. We had excellent cooperation even before, but since 2018 we’ve set the political and legal framework called the Prespa Agreement, which enabled us to cooperate even better. I’d like to mention a legal principle which you know well, and to which we intend to hold on when it comes to the Prespa Agreement – Pacta sunt servanda, which means that agreements must be kept,” said Pendarovski.