Home Macedonia VMRO-DPMNE leader warned that the coal landfills are empty before the start... 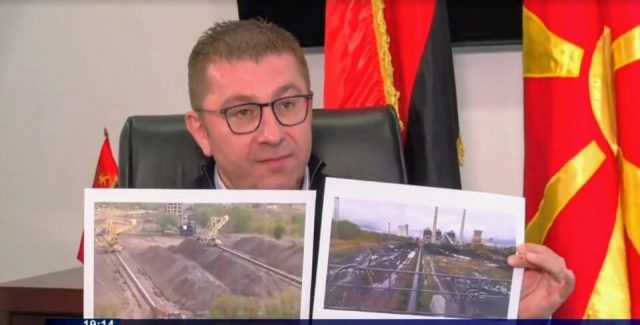 VMRO-DPMNE leader Hristijan Mickoski, regarding the announced energy crisis illustrated through photos that the coal landfills are empty before the start of the heating season, the mining machines are drowned, and the Government will import 50 million euros of coal, which Prime Minister Zoran Zaev showed how to be his and it is money from the citizens and who will pay for the bad management of the government with the company.

“Input in the price of each product used by the citizens is electricity more or less for some it is 5%, for some it is 90% and it is logical if that input is higher and if it is more expensive, the product for the citizens will be more expensive. If bread costs 25 denars, and the electricity before this increase cost 10%, now it will cost 20% or 10% more and the bread will be more expensive, it will not be 25 denars, it will be 27.5 denars, it is proportional to that way the standard of the citizens will be reduced, and the inflation will be increased, and that is all because we do not have domestic production, ie we do not have production on which we can rely “, said Mickoski.

Mickoski illustrated with photos what the empty landfill in REK Bitola looks like at the beginning of the heating season and pointed out that the spaces in the photos should be full of coal, and that is because the mining equipment is drowned, i.e. submerged by the rains.