Home Macedonia IPIS poll: VMRO-DPMNE would win if general elections were to be held...

VMRO-DPMNE would win if general elections were to be held next week, according to the results of a poll conducted by the IPIS Institute.

The survey, informs IPIS, was conducted by telephone in the period between 19 and 22 October 2021 to 1102 adult respondents in the Republic of Macedonia.

In the survey, citizens expressed their views on their support for political parties and politicians. 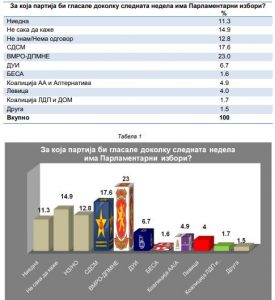 In order to observe the relevance and impartiality of the research, an impartial and objective questionnaire was created on the basis of which the poll was later conducted. The research was conducted using a random sample that was stratified to preserve the representativeness of the population in the Republic of Macedonia. It observed the demographic specifics of the population such as gender structure, age groups, level of education and ethnicity, with appropriate division of respondents by place of residence and constituency, with Skopje being taken as a separate entity because of its characteristics.