Home Macedonia VMRO-DPMNE publishes names of people that will bribe voters and will fill... 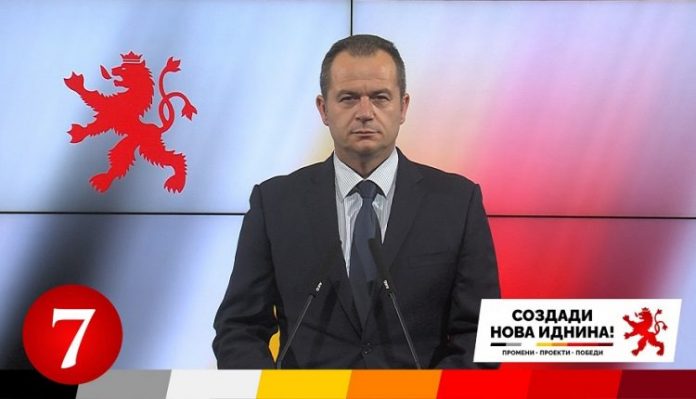 The Government is in a panic, just like in the first election round when it lost catastrophically, so for the second round it has hired people to bribe the voters. SDSM wants to mitigate the defeat and therefore hires people with a criminal past and officials in state positions to share bribes, exert pressure and threaten citizens, VMRO-DPMNE EC  member Dragan Kovachki told a press conference on Friday.

“Let both Zaev and Spasovski be aware that the people are aware, hope has been born, and no one will allow you to take their future, and give it to the companies of Vice, Trajce, Boban. SDSM activists and officials oppose Zaev’s criminal activities and we receive this information from them. We have information about a seriously developed plan for filling ballot boxes in settlements of Saraj and settlements of Bitola. Today we will publish the information received from people from SDSM, who no longer want to serve the hybrid regime, and work for Vice, Trajce and Boban Zaev to build marijuana factories,” said Kovachki.

He claims that for Bitola the main responsible for bribery, pressure, threats and stuffing of boxes is a certain Vasko K.

“He is the director of a large state-owned company, directly subordinated to him: Zoran P., Ilche ​​P., Daniel J., Sasho N., Goran Sh., Petar P., Ujar K., Shevgul M., Vangel B. , Aleksandar N., some of these people are employed in the Ministry of Interior and classically abuse their official position and authority. Responsibility will follow for all of them,” said Kovachki.

“On the territory of the city of Skopje the bribe is done by several groups, a group from Butel for bribery is led by Kosta N., who is probably the director of a Skopje public enterprise, Vladimir N., Edmond V., Senad S., Marin B., Hanza V., Goran Gj. The group from Gjorce Petrov is composed of Senat V., Martin T., Nesho K. In Karposh, the group is led by Dushko V., current director of a public enterprise and Jon F., a senior official in another state-owned enterprise,” said Kovachki.