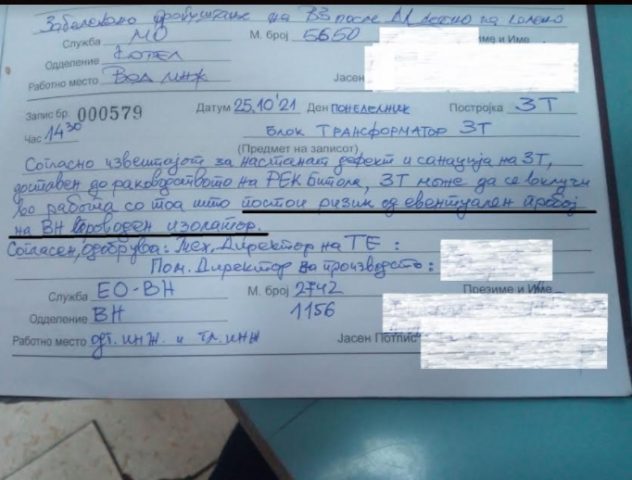 The fire that occurred due to the explosion of the power transformer on Block 3 in REK Bitola is a reflection of the way SDSM pushed Macedonia into the abyss from which it will be difficult to get out if VMRO-DPMNE does not take the situation into its own hands, said member of the VMRO-DPMNE Energy Commission StevcheAntovski at a press conference.

According to Antovski, the precise information on the causes of the fire says the following: the picture clearly shows that the expert services in REK Bitola who performed internal audit of the transformer, in a record submitted to the management of REK Bitola, indicated that there is a risk of breakage of high voltage conductor. And that is exactly the reason for the transformer fire: breakthrough of the high voltage conductive insulator of the transformer of Block 3, which the current management of ELEM pointed out in the official announcement to the public.

In order for the clumsiness of the leadership set by SDSM in REK Bitola to be greater, they approved this transformer to be in operation despite the problems.

“Such improvisations in energy are a feature only during the rule of SDSM,” concluded Antovski.

Antovski says that the power system has never been in a worse condition since its existence. The SDSM-led government must bear responsibility for such negligence and its destruction, he adds.