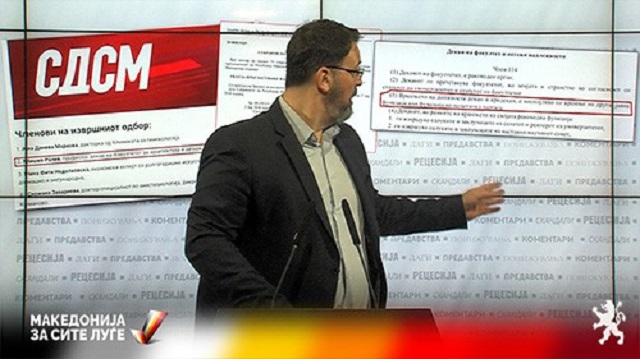 The new party leader of SDSM and Prime Minister-designate for the next government Dimitar Kovachevski illegally appointed a university dean in the party bodies of SDSM, which directly violated the law on higher education, VMRO-DPMNE spokesperson Naum Stoilkovski told a press conference on Monday.

“Kovachevski, who has not yet come to the position of prime minister, in the style of his commander (former prime minister and leader of SDSM, Zoran) Zaev started violating the laws,” said the spokesperson of the opposition party at the beginning of the press briefing.

Stoilkovski continued that the mentioned violation was concerning the appointment to the Executive Board of SDSM, Mishko Ralev, professor, dean of the Faculty of Architecture and Design. He pointed out that this violates the Law on Higher Education of the Republic of Macedonia, which was otherwise adopted in 2018, during SDSM’s rule.

“Behind me is part of the law – Article 114, paragraph 3 is decisive, ‘Performing the duty of dean and vice dean, is incompatible with performing another public office or function in a political party,” said Stoilkovski, presenting excerpts from the laws and announcements.

“The Executive Board of SDSM is the highest party body in a political party. Zaev’s pawn Kovachevski and Dean Mishko Ralev also decided to violate the law on higher education. Hence, we demand that Zaev’s pawn Kovachevski to remove Mishko Ralev from the SDSM Executive Board or that Ralev resigns from the position of dean,” said the VMRO-DPMNE spokesperson.